Posted by Dee Ward on Oct 13, 2015 in High Holyday Sermons, Sermons | No Comments 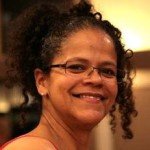 When I read the theme in preparation for this year’s High Holiday Services it made me think about the words we say and do not say to one another. The theme made me think of the vitriolic discourse of our current presidential hopefuls, and it made me think of the hateful words of Dylann Storm Roof as he prepared to kill nine people at the church in Charleston. I also thought about my own interactions with family and friends, as well as words that help, calm, support and heal. Words certainly have power. But when we withhold our words, that too has its own powerful effects. I would like to share with you the effects of withholding words in the context of my parents’ lives.

In 1965, the year I was born, I was adopted from San Francisco Social Services. My adoptive parents, Ruth and Leon Dozier, Jr., both African-American, were from the South – Georgia and Arkansas respectively. They were born in 1916, during World War I. Soon after, the Bolsheviks would dismantle the Tsarist Empire in Russia, American women would be legally allowed to vote, and Woodrow Wilson was President. Ruth and Leon were teenagers during the Great Depression; they would have experienced the horrors of the Jim Crow South first hand. They, along with around 400,000 black folk would become part of what is known to some as the Great Migration, the move North and West, away from the injustice, inhumanity and abject poverty of the South. They settled in California.

World War II would bring more opportunities and experiences to my parents. They both worked along with everyone else toward the War effort. My mother worked a short time as a Rosie helping build ships, but mostly she worked as a maid and laundress. My father worked on the merchant ships as a scullion, the lowest rung of kitchen help. This was one of the only types of jobs a black man could have on a vessel at the time. However, I discovered that he would eventually work his way up to being a sous chef.

But here’s the thing: my parents did not talk about their lives before they adopted me. The brief history I just relayed to you was gleaned mostly from my own research using chronologies, ship manifests, U.S. census data and what I can remember of family photos. My parent’s silence about their lives, their pain – their truths – have never been shared with me directly.

You see, I was raised by people who believed (as many did at the time) that children “should be seen and not heard”.  I wasn’t supposed to ask questions. Like my parents, I was supposed to do as I was told – no questions asked. My parents withheld their words. Probably because, growing up in Jim Crow, keeping silent would have meant the difference between life and death.  I remember asking my father about what it was like being a kid. He had the canned response we have all heard, the “I had to walk ten miles in a snow storm” story even though he grew up in Arkansas – Or he changed the subject. There were no real truths. There were no feelings felt and shared openly. Based on the year my parents were born coupled with little hints and over-hearing the late night liquor-infused stories my father told his friends as I listened at my bedroom door, I have made up a story about their lives.

My father told stories about things that happened when he was young – people died. There was fear. There were lynch mobs. My parents actually drank from those “colored only” fountains that we see in the historic old photos.

I remember that my mother’s cheek, neck and chest bore the telltale taut and shiny skin of a very serious burn that had healed long ago. She must have been severely burned when she was young. I remember asking her, in the curious and unabashed frank way children always do, how it happened. I don’t exactly remember what she told me, but I knew that it was not the truth — children always know don’t they? She likely thought that she was protecting me by not letting me witness the reality of her suffering.

I will never know what my parents actually experienced.  Withholding words had a powerful effect. As a young person I asked direct questions and did not get straight answers. So I learned not to ask questions.

But as an adult I am learning to make different choices about how I use language in my life as a parent, spouse, friend and co-worker. I still struggle with finding my voice and finding the way to speak up and not stay silent. I recently wrote a paper for a college course that included some personal family history. I interviewed my son for a section of the work about a personal issue of his and I asked his permission to quote him in my paper to my professor. But in the spirit of full self-disclosure, he said, “Mom you can tell him everything. This is reality. I’m not embarrassed.” So I guess it’s kind of cool that after all the silence that my parents modeled to me, I have been able to parent in a way that promotes the opposite.

It is true that it can be difficult to share something that is sad or painful – especially if the story is attached to our own experience or to our family’s history. I do worry that I am sometimes too careful myself. However, the benefit of telling the next generation and telling each other about our experiences is that we provide opportunities to teach empathy and compassion and share important cultural history and personal – or even societal and political narrative.  When we withhold this, we are withholding the Torah of our lives, the lessons learned by us and by our predecessors.

It is up to us to keep the transmission going.  By breaking the silence we empower ourselves and also the generations that will come after us.