Wood Street Commons Threatened with Eviction in the Coming Weeks!

Posted by Madonik on Dec 12, 2022 in Homeless Action Blog | No Comments

Out-going Mayor Libby Schaaf had scheduled “deep-cleaning” (effectively eviction) of the Wood Street Commons site on Monday, January 9th, 2023, the day after she was to leave office.  Due to weather and other concerns, legal advocates have secured a brief delay until January 18th.

It’s time to let Mayor Sheng Thao know that we expect a new approach when she takes office on January 8th, one that recognizes the humanity of the unhoused community and treats them with respect.  Please welcome the new Mayor and ask her to honor her campaign promises,  drawing on her own lived-experience of homelessness.  You can also contact her at via Twitter.

Read the Press Release from the Wood Street Commons community.

The Wood Street Commons community celebrated at their 3rd annual X-Mas Party on Saturday, December 17th.  They were joined by members of Kehilla’s Homeless Action Committee, including our chair Naomi Stein, Barry and Susan Stock, Jeanne Finberg, and Talya Husbands-Hankin.

The theme: Support Housing for Everyone!  Members of the Wood Street community called on visitors to protest the eviction of the Wood Street Commons that outgoing Oakland Mayor Libby Schaaf has announced for the second week of January, 2023.  Hear them speak in this video by Caron Creighton.

Visitors helped decorate a tree, shared desserts and drinks, enjoyed the music, and participated in an art auction.   Photos by Susan Stock: 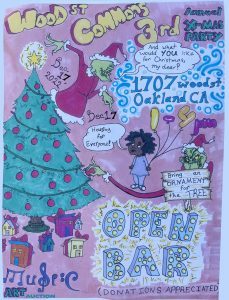