Posted by Madonik on Oct 19, 2022 in Homeless Action Blog | No Comments

On Wednesday, October 12th, we were honored to welcome four leaders from the Wood Street Commons encampment in West Oakland to the Kehilla sukkah.

LaMonte Ford, LeaJay Harper, Moose, and John Janosko told us about their personal journies that brought them to Wood Street, where they found stability and community. 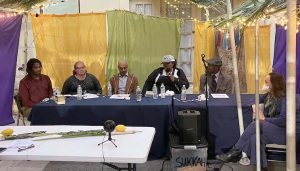 As you will hear in the video recording, this stability is threatened by Caltrans and the City of Oakland, who have already pushed hundreds of other homeless community members out of encampments on Wood Street.  The City of Oakland does not have even temporary shelter for most of these who were displaced.  While some options were offered to them, many refused offers that did not allow them to keep their vehicles, belongings, pets, and community connections.  Many showed up to protest at the Oakland City Council meeting on October 18th.

The Kehilla Homeless Action Committee continues to support the residents of the Wood Street Commons and other encampments through material donations to the Kehilla Homeless Depot, through financial support of Love and Justice in the Streets, and through calls for action to the Oakland City Council.  Please join us in these efforts!