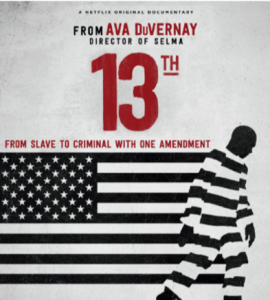 As the EJC launches work on a Criminal Justice Reform Initiative, we would like to invite Kehilla members to join us in understanding this highly pertinent and timely set of issues.

Over the last decade, massive organizing efforts, led especially by black and brown activists and their allies, are shining a harsh light on America’s deeply unjust criminal justice system. To better understand the scope and history of the problem, EJC members came together in December to watch and discuss Ava DuVernay’s award-winning 2016 documentary, 13th.  The film interweaves historical footage and contemporary analysis to explore the nexus of racist and economic forces behind the mass incarceration of African Americans. We suggest anyone interested find a way to see this movie, currently available through Netflix. (It is possible the EJC will sponsor an event showing parts of this film.) Its content is powerful and upsetting, so perhaps is best viewed with others.  Anyone wishing to organize a Kehilla event around 13th can contact EJC Chair Karen Rachels, karenrachels@gmail.com, for encouragement and assistance.

Here are some highlights extracted from online reviews:

Despite modest recent reforms to some federal and state incarceration policies, urgent work remains to be done. Close to home, the drive for reform of state and county prison and jail policy and conditions is being led by groups like the Ella Baker Center, the Justice Reinvestment Coalition of Alameda County, and the Live Free Committee of OCO (Oakland Community Organizations).  Last October, Live Free issued a report, entitled, “What’s Up with Our Jails? Holding Alameda County’s Sheriff Accountable,” that detailed shocking abuses in the Alameda county jails and Sheriff’s office.  Readers can find the full report at: http://www.oaklandcommunity.org/ourjails/ and examples of the media coverage it generated at: [http://www.oaklandpost.org/2018/10/05/report-alameda-county-jails-reveals-dastardly-conditions/] and [https://www.mercurynews.com/2018/10/07/letter-alameda-county-jails-are-failing-inmates/].  EJC member Richard Speiglman was instrumental in researching and writing the report, and the full committee is now focused on organizing around the report’s insights and recommendations.

For its first action, the EJC is working with social justice committees at Plymouth United Church of Christ and possibly a third OCO-connected congregation, to plan a series of Criminal Justice Reform workshops focused on the Alameda county jails and Sheriff’s office. We plan to offer the workshops to all congregants of the partnering congregations, with these aims:

(1) Create a wider circle of interested and engaged folks who can be called on periodically to advocate at meetings of the Board of Supervisors, a City Council, or Police Commission;

(2) Offer a model that other congregations can adopt/modify;

(3) Encourage wider participation in our congregations’ social/economic justice committees and efforts to connect with one another.