Thoughts from a Visit to Lesbos 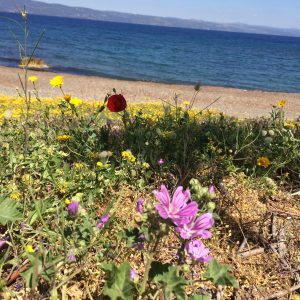 Flowers by the beach, with Turkey in the distance

The beach is very rocky – such a variety of sizes and colors of stones.  They are slippery and painful under my tender feet.  I am on a beach in the north of the Greek island of Lesbos.  Six kilometers across the way is Turkey – just there; it looks like a deceptively easy distance to cross.  Next to the road are red poppies, yellow and purple flowers, and a row of trees recently pruned.  White paper cranes hang from the trees “Birds without borders” and “Peace” in many languages written on them.   The water is dark blue, and calm.  For months this was a landing site for refugees from Syria, Iraq, Afghanistan, any number of countries that have civil strife or are suffering the repercussions of climate change.  They came across this narrow channel in fear and desperation.  There is a ghostly presence, a reminder of that time – clothing washing up, bits of wooden boats on the sea floor.  A few kilometers away is the lifejacket graveyard; clearly these life jackets would not save anyone – they are flimsy bits of orange fabric around Styrofoam.

When the rubber boats, overloaded and overcrowded, arrived in the night, local residents greeted them:  a toddler passed from parent, an older woman greeted with a smile.  Frequently they wore layers and layers of clothing – human suitcases.  Someone recently found a key on the beach – the key to someone’s home in Syria or Iraq or Central African Republic.  Who leaves their home, pays thousands of dollars to be transported in unsafe vessels, risking drowning, if one were not desperate?  These are people moving into the unknown with the hope that there is someplace safer than where they come from, somewhere on this earth.

The Taverna across the road that had turned into a greeting station is now a Taverna again.  The beach is mostly clean and the water is inviting.  The beauty is exquisite.  The region is desperate for tourists.  A few of us there for a yoga workshop and some remaining volunteers are the only people in the hotel and in the restaurants.   The political situation changes dramatically week-by-week and even day-by-day.  The Frontex boats of the EU and the Greek coast guard patrol the waters to prevent further boats from crossing.   At the time I was there, in April, most refugees were confined to a camp an hour away surrounded by barbed wire.  Prior to the EU-Turkey agreement the camp was open and NGOs provided food, clothing, health care, assistance with registration, and a compassionate ear or shoulder.  Most of those NGOs were now prevented from going in.  A few “open” camps did continue to provide services.  Those who had managed to make it to the Greek mainland were in camps there, their future unclear.

As a Jew – the daughter of a holocaust survivor (my mother) and the granddaughter (on my father’s side) of refugees from Russia – being on that beach, I felt the experience of that crossing in my bones.  I was surprised at how profoundly moved I was, and how, for maybe the first time in my life, I truly felt my ancestors inhabiting my DNA.  We are the children of

generations of refugees, and their experience lives in our bodies.  As I stood on the rocks, my feet in the Aegean, I held witness to the crossing of the refugees who landed here.  These people, like my people – like all people, are longing for safety and a chance to live in peace.

I felt my presence in that region, doing business with those locals who had opened their homes and their hearts, was in itself a mitzvah.  At the very least I feel an obligation to continue in small ways to be sure that we keep the door open, that a compassionate hand is always at the ready.   One organization that emerged in the area from this refugee crisis is called Starfish – after the story of the girl who walks down the beach tossing the starfish back in the sea, a seemingly endless task; how can she save them all?  Maybe she can’t save them all but she can save this one, and this one, and this one….. Another group is called Drop in the Ocean; whatever we do is worthwhile even is it seems just like a drop, because someone else will provide another drop and then another.

A Message from Julie Litwin, Immigration Committee Co-Chair:    A new committee has recently formed at Kehilla for those who are involved in, hope to be involved in, or care deeply about any aspect of immigration-related work or refugee support. The purpose of the committee is to provide mutual support and to facilitate communication among ourselves and with all of Kehilla. We have created two email lists, one for those who would like to participate in the committee and one for those who would like to share or receive information about immigration or refugee support events and actions. We do not anticipate a high volume of emails on either of these lists. If you would like to be on one or both of these lists, or if you would like more information about the committee, please contact Julie Litwin and Frances Kreimer at ImmigrationCommitteeChairs@kehillasynagogue.org