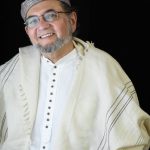 Remarks by Rabbi David J. Cooper at the celebration, February 12, 2017

I think my path to social activism began in a moment when I was about eight. I remember being in a car going through the Bowery in Manhattan. We stopped at a light and looking out the window, I saw a man eating out of the trash can at the corner. I don’t know how it was, but somehow I knew that there was nothing wrong with this man that he had to eat out of the garbage, but that there was something wrong with this world that some people were forced to eat from the trash.

Later, in my early teens, I started visiting the Marxist Jefferson Bookstore near Union Square to get books on capitalism and racism. I hung out at the Student Union at NYU where I watched documentaries explaining the war in Vietnam and I ended up joining the high school wing of SDS. I became a contributor to the underground student paper at Stuyvesant High School and I was proud that my mother got called into the principal’s office because I had been a leader of the demonstration against having police in the school.

My Social Action & Jewish Practice Unconnected
Now all this was happening while I was active in the Conservative Movement’s Leaders Training Fellowship of the United Synagogue Youth. On Shabbos mornings, I was a leader of services at junior congregation. And on Friday evenings, as a member of Hashomer Hatzair, a secular Jewish Socialist youth movement, I taught Marxism and played ping pong. Somehow, I didn’t get it that these activities were supposed to be contradictory.

For years I was an activist, and at the same time, I pursued my Jewish practice and studies. But I never really integrated my activism and my Judaism, not until I joined Rabbi Burt in 1984 to organize a leftist and spiritual synagogue called Kehilla. I have told the story many times, most recently in the last Kehilla newsletter, about how I decided that starting a leftist synagogue was the most subversive thing I could do. And it was also important to me personally because I wanted to raise my as-yet-unborn children in a community which seamlessly integrated social activism and Jewish spirituality. I did, and now Talia and Lev are two of the smartest organizers I have ever met and they identify their activism with their Jewishness. So in my experience, it takes a synagogue to raise an activist.

Kehilla Starts During Reagan
We started 1984 at a time of reactionary Reagan policies. It was pretty soon after the Israeli invasion of Lebanon when in the wake of the Sabra Shatila massacres, many of us felt a little crazy at other synagogues on High Holy Days where rabbis made no mention of the moral issues raised by the war. We didn’t want that silence in our synagogue. Later we became the first synagogue to recognize the need for a Palestinian state and recently we passed with a large consensus our values statement on Israel/Palestine.  (You can view the values statement here: https://kehillasynagogue.org/kehilla-statement-of-values-on-israelpalestine/.)

So, it’s on the backdrop of the politics of the early 80’s that I started to work with Burt and with a core group of folks to create a synagogue of resistance, or a “Jewish base community.” We felt we were better suited for the struggle if we were part of a multigenerational caring community that shared our progressive values and that would also be there for each of us in our times of celebration and in our times of grief and vulnerability. I believe that we organized Kehilla in 1984 so that it would be here in 2017. Now we need it more than ever. Thank God or Whatever that we don’t have to organize this from scratch at this point.

And I am also very grateful that there is new leadership in Kehilla that is too young to have been there when we started – people who are enthusiastic about perpetuating Kehilla’s original vision, people who are evolving it into a new generation. I am proud that Kehilla is the kind of congregation to which Rabbi Dev Noily, Hazzan Shulamit Wise Fairman  and Executive Director Michael Saxe-Taller would want to dedicate themselves. And with the whole staff, and all the activists and congregants of the shul, we are in good hands.

A Teaching of Two Tales

This is a really tough time we’re entering. I thought that if I was going to address you all at this gathering of so many interfaith progressives that I should do a short teaching suitable to this moment—and I love to tell stories. So I’ll tell you two.

The first story sounds as if it could come from Jorge Luis Borges or perhaps Franz Kafka.

A generation of people appears on the planet and it is revealed to them that they will be able to make their lives more comfortable, but to do so they must produce a very deadly poison. Now before they can embark on such a project they have to answer two questions: First, can they build a containment for the poison that will not leak for thousands of years, and second, can they create a warning to tell the countless generations after them to never open the containment? Well, in fact, we actually are that generation and we have produced nuclear waste and we have never answered either of those two questions. So now, way after the fact, there are people dealing with these issues.

I was particularly interested in the issue of how to create a warning that can be understood and obeyed well into the far distant future. On PBS, I saw a documentary where some scientists wondered whether there had ever been a similar circumstance in the past. And they actually did find a parallel situation.

In Japan they found a worn out and weathered stone with ancient writing on it fixed into a hill near the ocean. And on it it said something like: “We were hit by a tsunami that flooded this area. Do not build any houses lower than this stone.” And, if I got the story right, what the research showed was that the stone was eventually treated like some sort of old artifact, an antiquated relic. Generations later, people failed to get it that the words on the stone were addressed directly to themselves in their own generation. Today. Today.

And so, I wondered to myself about what ancient warnings have our predecessors set out for us? Are we treating their warnings to us as mere artifacts? And I realized that the warning to us was the words of the prophets, words that were written in a time of turmoil, a time of corrupt leadership. The warning of the prophets, boiled down to its core is: “If you build a society based on corruption, which exploits and oppresses the vulnerable and molests the immigrants and the refugees, your society will be destroyed.” Don’t build houses below this stone.

A Visit to the Messiah
And this brought to mind a second story from the third or fourth century of the common era in a tractate of the Talmud [Sanhedrin 98a]. It is a story based on the legend that the prophet Elijah, privy to many secrets, never died but wanders about on earth and also in heaven. So the story goes that Rabbi Joshua ben Levi encounters Elijah one day and asks Elijah to tell him when the Messiah or Mashiach will come.

Elijah says, “Go ask him yourself.”

Rabbi Joshua is surprised. He asks, “Well, where can I find the Mashiach?”

Elijah says “He is there at the gate of Rome and he is the one sitting among the poor people suffering from diseases, and he is there bandaging their wounds.” So Joshua journeys to Rome and sure enough he finds the Mashiach just as Elijah said. Rabbi Joshua and the Messiah exchange some words of greeting and then Joshua asks: “So when are you coming?”

Well, Joshua then takes a journey back to Elijah and no Messianic era has commenced. So Joshua complains to Elijah, “Mashiach lied to me. He said he would come ‘Today,’ and he did not come!”

Today, Today
So we here, like our predecessors, are the ones who need to listen to the voice. We are the ones today for whom the warnings were intended. Today. Today.

We are supposed to choose between life and death. We can choose life and take responsibility to do all that we can toward creating a society of justice and shalom, a beloved community, OR we can choose the path to a moribund society if we are complacent and complicit by remaining silent in the face of exploitation, oppression and hatred.

We are the ones who must listen to the voice of warning. We must act as the sparks of Messiah that each one of us is – that is if we would really listen and take action on the warnings that we have received.

And while we are at it, we also will have to leave some warnings of our own for the sake of the generations that are coming after us.

As the expression goes: We are the ones we have been waiting for.

So lets not wait. Today! Today!