The Buddha and the Ba’al Shem Tov: An Evening of Contemplation and Exploration with Rabbi Burt Jacobson & Zen Buddhist Priest Norman Fischer

Posted by Dee Ward on Nov 3, 2016 in Announcements | No Comments 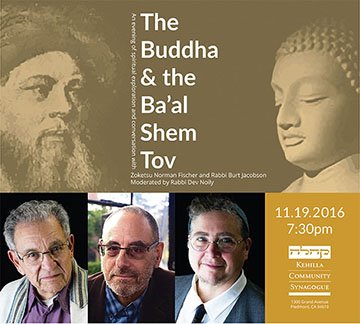 Happy Birthday Rabbi Burt! It’s a party and an evening of contemplation and exploration of the lives and teachings of THE BUDDHA and the BA’AL SHEM TOV.

Siddhartha Gautama Buddha was an ascetic and sage who lived in Nepal during the 4th century B.C. Buddhism was founded on his teachings. He was later known as the Buddha, The Enlightened One.

Rabbi Israel Ben Eliezer, who came to be known as the Ba’al Shem Tov, Virtuous Master of the Holy Name, was a shamanic healer, nature mystic and teacher of ethics, who lived in Poland in the 18th century. His radical approach to Judaism became the inspiration for the founding of Hasidism.

Both of these teachers taught ways that individuals could transform their lives and find relief from suffering, live mindfully, manifesting equanimity and compassion, developing the capacities of wisdom, joy, compassion, and loving-kindness.

How did these two teachers of enlightenment who lived more than two thousand years apart in entirely different regions of the globe, come to share such related ideas? How do their teachings differ from one another?

Kehilla’s founding rabbi and visionary teacher, Rabbi Burt Jacobson, and noted poet, meditation teacher, and Zen Buddhist priest Zoketsu Norman Fischer will explore these two great fountains of wisdom in which so many have found a spiritual path.

The dialogue will be followed by delectable desserts and drinks in the Social Hall.

Copies of Rabbi Burt’s new book This Precious Moment: The Wisdom of the Ba’al Shem Tov will be available for purchase and signing.

Get your tickets now – we expect this event to sell out!

No one turned away for lack of funds.