Posted by Dee Ward on Dec 26, 2016 in Immigration Committee | No Comments 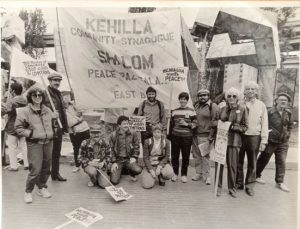 A Brief History of Sanctuary

Although sanctuary is an ancient tradition dating back to Biblical times, the current Sanctuary Movement began in the 1980’s as a response to the injustice and danger faced by those who fled violent civil wars in Central America, only to be threatened with deportation from the US back to their home countries where they were likely to be met by death squads. Over 500 congregations were part of an underground railroad that helped to move hundreds of thousands of these individuals through the US to safe houses and safe congregations. During this period, Kehilla played an active role in the Jewish Sanctuary Coalition and the East Bay Sanctuary Covenant, which dovetailed with its activism against Reagan’s support for the Contras in Nicaragua.

The New Sanctuary Movement has emerged in the past decade in response to the plight of large numbers of Central Americans, many of them unaccompanied minors and families, who are confronted with deportation when they come to this country seeking asylum due to extreme gang violence and poverty at home. The need for sanctuary has also increased in recent years because of immigration policies that prioritize detention and deportation of all undocumented immigrants, regardless of the circumstances and regardless of how long they have resided and actively participated in life in the US. The actions of ICE (US Immigration and Customs Enforcement) have terrorized communities and torn families apart.

In light of current anti-immigrant sentiment in our country and the promise of the newly elected administration to build walls and deport millions, the need to oppose draconian anti-immigrant policies and to protect immigrants in our community has intensified. At its November meeting, the Kehilla Board of Trustees unanimously passed the Proposal on Sanctuary to reaffirm Kehilla’s commitment to provide sanctuary for those facing deportation. The resolution explains what we understand sanctuary to be and asks us to explore what further steps we can take.  The Immigration Committee and Kehilla’s leadership will be looking at strategies and ways to  move forward on these issues in the coming weeks.