Report Back from Our Refugee Support Action 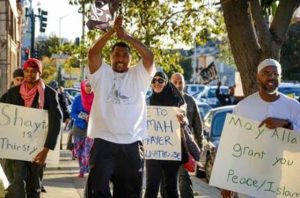 Almost 20 members of Kehilla and Jewish Voice for Peace and our friends gathered in the dry spell between the rains on Saturday, April 9, to canvass the 42nd Street and Telegraph North Oakland neighborhood near the Lighthouse Mosque. At 2 pm, we met at the mosque for a training by JVP member and Lighthouse Mosque congregant Dina Zayour who talked to us about how to ask retailers and residents to place pro-Muslim and pro-refugee posters in their windows. We had exactly the one hour and fifteen minutes of dry weather we needed to walk through the neighborhood in teams of two or three. Both residents and merchants met us with a lot of appreciation and willingness to post and, in some cases, with substantial emotion.

At 4 pm, we met with the Mosque’s Imam Sundiata Rachid and his daughter, Zaynab, for laughter-filled mutual introductions and discussion. We were served dates, fruit and bean pie prepared by members of the mosque.

Here is a thank-you from Dina Zayour, underscoring the importance of mutual support:

“Hello, Everyone. I wanted to thank the Kehilla Synagogue community as well as JVP on behalf of our community at the Light House mosque for the canvassing you did, and mostly for not turning your face the other way when injustice fell upon a group of people for no reason but prejudice. As Jews, I guess this is nothing new to you all!

“I hope we collaborate with each other to make our communities tolerant of each other but mostly to strive for equality, human rights and justice for the underdog and alienated.

“I will also have to borrow a couple words from the ‘hood’ and say: it was surely nice to see your white asses showing up for solidarity with us, immigrant Muslims and Black Muslims :)”