Report Back from Kehilla Activist Student & Her Social-Justice Arrest 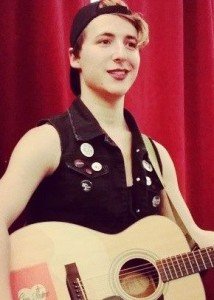 [Note from Rabbi David: Rosa Petterson has been a part of Kehilla from birth. She was a high school activist on LGBTQI issues and during that time, she gave an inspiring High Holy Day sermon to the congregation. Child of David Lee and Barbara Petterson, Rosa has continued her activism into University of California Santa Cruz, where she started as a freshman this year.]

Early this March, five other UC Santa Cruz students and I took to the highway as part of the “96 Hours of Action” against police violence and tuition hikes called across the UC system, which culminated later that week in a strike that shut down campus at UCSC. Chaining ourselves to trashcans filled with concrete, we sat down on the highway, chanting “education, not incarceration!” We spent 5 hours there before being taken to jail.

The state of California spends nearly 7 times as much per prison inmate as it does per student. When tuition is raised, as it was last fall by the UC Regents, poor students and students of color, already underrepresented in the UC system, are increasingly pushed out, into the waiting arms of the police and a criminal “justice” system that seems more and more to be a mockery of the very word, as we have seen most recently and vividly in Ferguson, Staten Island, Baltimore, and McKinney, Texas. In taking this action of civil disobedience, we wanted to stand in solidarity with those across the country and the world who have been fighting against police violence and to connect the struggles we face as students—against skyrocketing tuition and fees and often against crushing long-term debt—to a broader context.

Growing up at Kehilla, I was always encouraged to hold a strong sense of the obligation to do what is right. To me Kehilla has always been a place where we understand the imperatives of tzedakah, justice, and tikkun olam, repairing the world, not just as things we do, but as foundational to who we are—as people, and as Jews. Intertwined with this for me has been an understanding of what it means to be an Israelite—one who struggles or wrestles with g-d. For me, struggling with g-d means not only participation in religious debate, but beyond that a responsibility to question and challenge all forms of authority, to not only think critically about power but to turn those thoughts into action.

Coming from Kehilla, UC Santa Cruz seemed like the perfect place for me. The school’s slogan is “the original authority on questioning authority,” and it advertises itself as a school with an activist legacy, from its history of student protest to Angela Davis’ position as a professor emeritus. Indeed, as a Feminist Studies major, I have fallen in love with many of my classes, which have delved into complex issues of our understanding of the world and responsibility to act for its betterment.

However, when I took on that responsibility, putting my body on the line in a civil disobedience action, the university’s response was harsh and swift. Before we were even booked into jail, the 6 of us were served with letters placing us on an indefinite, interim suspension, one that has continued until now, over 3-and-a-half months later. Those of us who had been living on campus (including me) lost the housing, healthcare, and food we had been relying on, and all of us were forced to take incompletes in our classes as we were legally banned from all university property. The university is attempting to suspend me and other students for 4 quarters, or nearly a year and a half, and has afforded us little to no due process in challenging its rulings, denying us legal representation and full hearings to challenge the suspensions within the Supreme Court-mandated The university has come under major fire (http://www.theatlantic.com/education/archive/2015/05/the-betrayal-of-student-activism/392759/) for its repressive actions, as community members, students and faculty have spoken out against the denial of due process and the disproportionate nature of our punishments when compared to, say, the relatively light punishments given to students who commit sexual violence (UCSC has recently become the subject of a federal Title IX investigation of alleged mishandling of sexual assault cases).

In addition, the 6 of us are facing 30 days in jail along with $40,000 in restitution to pay for the time of nearly 100 police officers, many of whom weren’t even responding to our protest.
Ironically, we went out to protest student debt and incarceration, and are now facing even greater debt and incarceration.

The 6 of us are now working to raise funds to defray the cost of restitution and to hopefully file civil suit against the university, with the goal of forcing UC Santa Cruz, along with other schools, to change its student code of conduct to disallow such harsh, repressive sanctions against student protest, and to ensure that students are afforded real due process. The movement against tuition hikes is working; in response to pressure from students, UC Pres. Janet Napolitano (who deported millions as head of the Department of Homeland Security before coming to the UC) announced a 2-year in-state tuition freeze, and although the deal is not nearly enough—it leaves the university still unaffordable for many, and pays for the freeze in part by raising out of state tuition—it shows that student protest does have the power to create real change. Our hope is to ensure students’ right to continue to act for justice in the future, without facing the kind of harsh, repressive response we did.

Please consider supporting our legal and restitution fund at gofundme.com/oee2do.