Posted by Julie Litwin on Jun 29, 2022 in Immigration Committee | No Comments

Wren Ganin-Pinto and I were honored to represent Kehilla in a journey of faith leaders, activists and folks directly impacted by ICE detention that was organized by the Interfaith Movement for Human Integrity and Dignity not Detention.  We traveled to the seven ICE detention facilities in California and other significant sites.  At each location we joined in prayer vigils with people in the community who are working to close these facilities and to support those who are currently incarcerated there.

You can read more about the pilgrimage, each of the locations we went to, actions you can take and resources in this beautifully done guide.

I would like to share a few moments from each day of the pilgrimage that were especially meaningful to me. 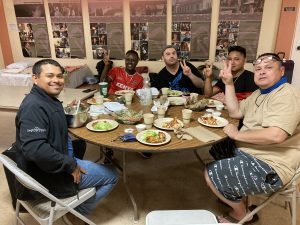 Evening Prior: A number of out-of-town folks who were part of the pilgrimage came to the Bay Area/Ohlone Territory the day before the pilgrimage began.  Four individuals joined our sanctuary guest, Sergio, for dinner and spent the night at Kehilla.  All had been previously incarcerated in the facilities we visited.  This evening turned out to be a special opportunity for these folks to connect before we embarked.  Pastor Allison Tanner from Lakeshore Avenue Baptist Church helped organize and facilitate this evening. Carolyn Schour from our Sanctuary Task Force provided breakfast and clean-up in the morning. Gratitude to Pastor Allison, Carolyn and Kehilla for making this possible. 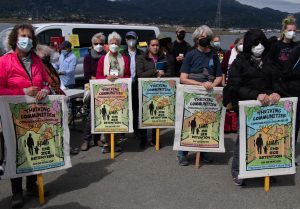 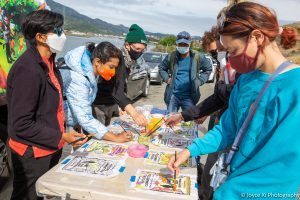 Day 1: The pilgrimage began at San Quentin/Coast Miwok Territory.  This site is significant because many immigrants who are incarcerated at San Quentin are directly transferred to ICE when they are released, rather than being allowed to return to their families and communities, a situation that we are actively fighting to change through advocacy for the VISION Act. There are two gates at San Quentin.  The West Gate, where we gathered, is where the vans come to pick up those who are transferred to ICE.  It is also the gate where produce and supplies are delivered to San Quentin. It seems that these human beings are seen as items to be picked up and delivered.  San Quentin is also the site of a huge, deadly COVID outbreak during the pandemic, where more than 2000 people were infected and 29 died.

About 10 Kehilla members were able to join us at San Quentin for the send-off. Art, music, poetry and prayer were important parts of each of our actions.  We left origami butterflies at each location. 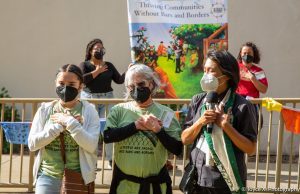 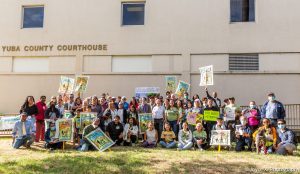 Our next stop on day one was at Yuba County Jail in Marysville/Nisenan Territory. This is the last detention facility in California run by a county. Others are operated by private for -profit corporations. The county has thus far been unwilling to join other counties in terminating its contract with ICE.

Many of you know Hulissa Aguilar and her aunt, Icela.  We met them at West County when Hulissa’s father/Icela’s brother was detained there.  After West County closed, he was transferred to Yuba County Jail and later won release.  Hulissa, who is now sixteen-years-old and a powerful spokesperson for families impacted by detention, spoke about the pain that was triggered for her when we arrived at Yuba County Jail. She also talked about her growing understanding of the long-term trauma and suffering caused to families when their loved ones are detained or deported.  The ripple effects of incarceration and family separation are profound and ongoing. 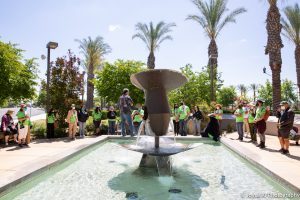 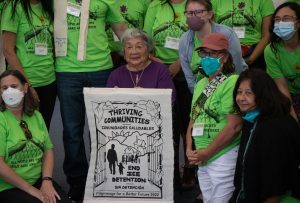 Day 2: Fresno, Clovis/Yokuts Territory We stopped at a memorial to Japanese Americans incarcerated during WWII.  This was a site that people were transported to and held temporarily before being moved to more long-term incarceration camps.  We then had lunch at the United Japanese Christian Church in Clovis and heard a talk by Marion Masada, an 89-year-old woman who was incarcerated with her family at age nine. It was very moving to witness the connection between this amazing woman and some of the directly impacted immigrants on the pilgrimage who had not previously heard testimony about this history. 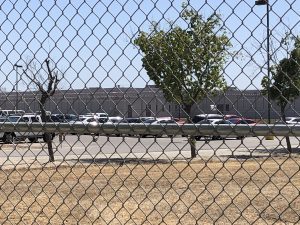 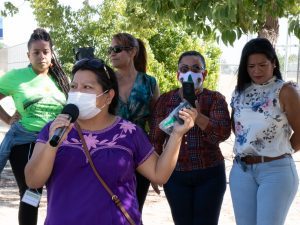 This is site is in a small agricultural town. The building was previously a prison and was recently repurposed as an ICE detention facility.  Despite the fact that California passed a bill in 2019 that would have prevented new ICE facilities (AB 32), ICE and several for-profit corporations circumvented the will of the people/legislature, by signing new contracts just before the bill was to take effect. The community fought valiantly to stop this and another facility, which, together, can hold over 1400 individuals, from opening in their city of 10,000. The inspirational women in the photo are agricultural workers who organized the community by going door-to-door and brought a throng of opposition to city government meetings in opposition to the expansion. Their message is that their town wants a community college, a clinic and a community center, not a harmful detention facility. 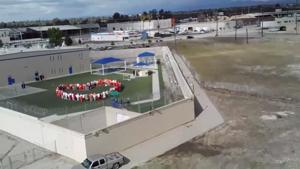 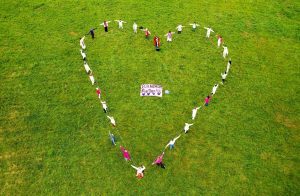 When we arrived at Mesa Verde and were confronted by its high walls, fence and barbed wire, which we could not see over, I remembered an action that took place in 2020 at the height of the pandemic. A group of those detained at Mesa Verde went out into the yard and formed a heart, a cry for help due to the unsafe conditions inside.  Activists on the outside were able to fly a drone over the yard and take a photograph.  Subsequently, a group of activists and faith leaders formed a socially distanced heart at the Berkeley Marina and were able to send a photo in solidarity with those inside Mesa Verde. 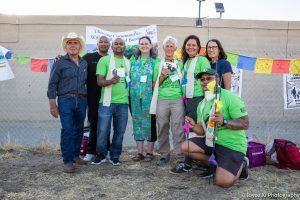 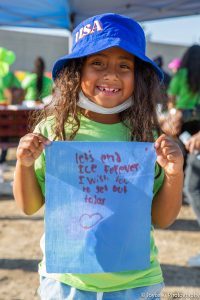 At Mesa Verde we heard more testimonies from folks currently inside and previously incarcerated there.  We were also able to bring photos of folks we know who had previously been at Mesa Verde and who wanted to be with us but couldn’t attend. 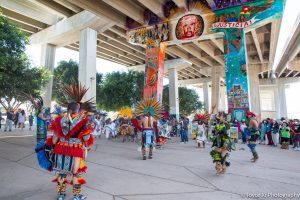 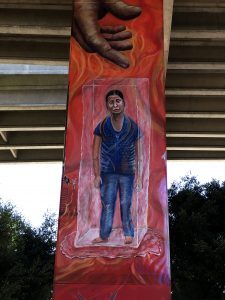 We were hosted by local groups at Chicano Park in San Diego with lunch, Aztec dancers, blessings and testimonies.  The local community wanted to have the main event here, rather than at Otay Mesa Detention Center, which is closer to the border and unsafe for some who wanted to participate.  Amazing art, music and spirit. 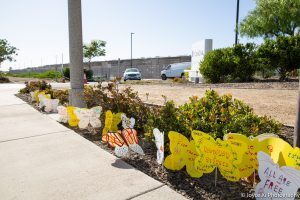 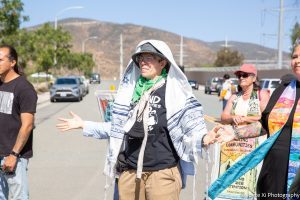 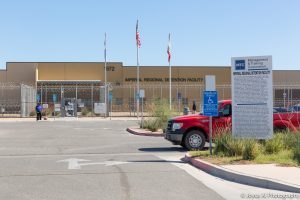 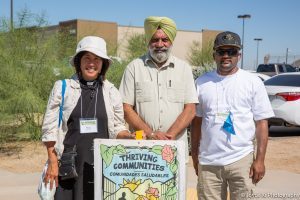 The drive from Otay Mesa through the borderlands to El Centro in the Imperial Valley was through barren rocky landscape with glimpses of the border wall.  We were hosted for dinner at a local Sikh temple. The priest there, Jaswand Singh, daily takes in folks who are released from Imperial and feeds and houses them for several days until they’re ready to move on.  He reported that there are at least 280 migrants from India detained at Imperial. He assists anyone who is brought to him.  Hospitality is one of the main tenets of the Sikh religion.

One of the participants in the pilgrimage is from a Latinx family in El Centro.  He was able to share much of the background of this region.  He also told us that there has never been a protest in front of the Imperial facility of more than 5 people previously.  So, our busload of 40, was huge for this location.

On our drive from Imperial north, we had to go through a checkpoint.  For me, this was one of the most difficult moments of our journey, as I saw the tension, fear bravery and resolve of participants on our pilgrimage who were facing possible questioning about their immigration status.  We had a lot of preparation, including a lawyer onboard the bus and role plays about what would happen if someone was questioned or taken off the bus.  Fortunately, none of this happened.  We were waved through without incident.  However, it was very painful to witness. 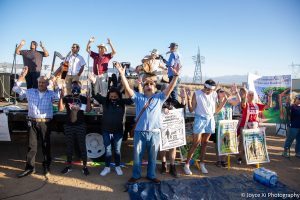 This was our last stop, complete with a band and food! This is a large facility in a very isolated place.  Yet, there is a lot of activism in the surrounding areas.  This, like the rest of the journey was a mix of facing a site of suffering in the company of hope and solidarity. 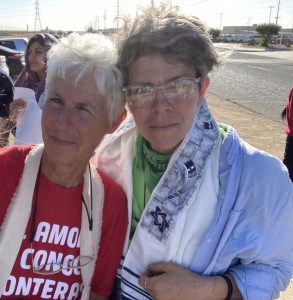 I love this new song created by Benjamin Mertz and Interfaith Movement for Human Integrity.

We Are Movement (audio link here)

Your and my story help make us whole

The ancestors’ spirits help heal the past

We carry the torch, shine light on the path

Hold the sacred fire – Freedom for all

Everyone is sacred across borders and walls

Abolish the prisons and all forms of cages

Workshops in Racial Justice and Integration

Board of Directors, Interfaith Movement for Human Integrity