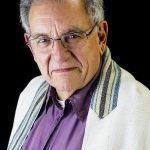 Note: This is the twelfth of an ongoing series of personal essays on the beginnings of Kehilla. Each article shares the origins of one or more of the ideals and/or values that motivated me to start Kehilla. The essays are adapted from the manuscript of the book I have now completed, There is Only One Love: The Ba’al Shem Tov in the Modern World.

It was the early 1980s and the world was on fire. The governments of Guatemala and El Salvador were persecuting their own citizens in horrific ways. And President Reagan was openly backing the Contra rebels against the popular Marxist Sandinista government in Nicaragua. Four million drought victims in Ethiopia desperately needed humanitarian aid. The Israeli-Palestinian conflict was raging. Israel had invaded Lebanon in 1982 and, with the complicity of Ariel Sharon, Israel’s defense minister; Phalangist Christian forces had entered two Palestinian refugee camps, slaughtering the occupants. The following year a public inquiry by the Israeli government found Sharon personally responsible for the massacres.

Soon after Ronald Reagan was elected in 1980, he began rattling his saber at the “evil empire,” the Soviet Union. He was actively advocating for the development of his bizarre “Star Wars” anti-ballistic missile system, which would be located in space. Many of us were afraid that the president might instigate a nuclear confrontation with the Soviet Union.

Lawrence Livermore National Laboratory—one of the two facilities that were designing America’s nuclear arsenal—is located less than forty miles from Oakland, where my first wife, Jonika Mountainfire, and I were living. Jonika decided to become an anti-nuclear activist and invited me to join her. We underwent non-violence training through the Livermore Action Group and we engaged in the frequent protests at the Lab, marching onto government property, getting arrested and being sent to the Santa Rita prison. There, we would organize the Jewish protestors and lead them in prayer and ritual. We once conducted a Passover seder outside of the Livermore Lab. The following year I received official permission to conduct a seder for sixty women—Jewish and Non-Jewish—who were being held in the county jail for trespassing onto government property.

Jonika and I decided to start a Jewish protest organization that we called Shomrei Shalom: the Jewish Anti-Nuclear Coalition of the Bay. We helped organize demonstrations and we marched with signs that read “Jews Against the Bomb,” and “No Nuclear Holocaust!” I spoke in public venues about the Jewish value of peacemaking and about the necessity of halting the nuclear buildup, drawing on Abraham Heschel’s writings about the danger of nuclear war.

Many progressives were terribly scared that Reagan might win a second term in 1984. The members of Shomrei Shalom decided that they needed to put all of their activist energy into defeating the incumbent president and electing the democratic candidate, Walter Mondale. This was a real dilemma for me. I felt that we needed to continue our struggle against the government’s preparation for nuclear war. Nevertheless, the coalition fell apart.

Of course, Reagan won the election, carrying forty-nine states. As I thought about what had occurred it seemed to me that political organizations that were based on single issues would have a difficult time sustaining themselves in for the long haul. This was another reason to establish a politically progressive synagogue, a congregation that would be dedicated to spiritual and moral ideals.

Daniel Ellsberg is an American activist and former United States military analyst who, while employed by the Rand Corporation, precipitated a national political controversy in 1971 when he released the Pentagon Papers, a top-secret Pentagon study of U.S. government decision-making in relation to the Vietnam War, to The New York Times and other newspapers. I met Dan in the county jail where we were both incarcerated for trespassing onto the grounds of the Lawrence Livermore National Laboratory.

The first Kehilla High Holy Day services took place in the Fall of 1983. I invited Dan Ellsberg to speak on Yom Kippur day. He agreed, but he was unable to do so because he had to be in Germany for disarmament discussions. But Dan’s wife, Patricia, gave a very inspirational talk.

I had signup sheets at the door of those High Holy Day services for people who were interested in the creation of a spiritually-oriented, politically progressive synagogue. The energy I had put into anti-nuclear activism now went into creating a vision for Kehilla Community Synagogue. The first meeting of interested folks met in June of 1984.