Posted by Dee Ward on Jan 24, 2017 in Announcements, Rabbi Burt's Blog | No Comments

Note: This is the ninth of an ongoing series of personal essays on the beginnings of Kehilla. Each article shares the origins of one or more of the ideals and/or values that motivated me to start Kehilla. The essays are adapted from the manuscript of the book I am in the process of completing, tentatively titled There is Only One Love: The Ba’al Shem Tov in the Modern World. 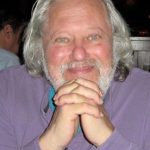 I met Barry Barkan at a Friday evening prayer service of the Aquarian Minyan in Berkeley in 1974. As I got to know Barry, I found him to be one of the most exuberant and loving human beings that I had ever encountered. In fact, he seemed to me to be a kind of living embodiment of the Ba’al Shem Tov. He was forceful and articulate, and he was openhearted, warm and kind. He always seemed to find something deeply unique and precious in every individual that he encountered. And you never knew what to expect from him—he could be deeply inspiring or wildly humorous, or completely audacious and outrageous.

In the 1960s, Barry had been an investigative journalist for an African American newspaper in the South, and his social and political views had been shaped by the spirit of that era. He fully believed that it was possible for human beings, through the visionary power of their souls coupled with radical social activism, to solve and heal the problems we faced. He always saw the potential in people and events, and believed that it would be possible to realize that potential.

I recall many conversations with Barry during the 1970s. I would often try to convince him that his optimism about the future was naïve and exaggerated; he, in turn, would counter my pessimism and cynicism, challenging me to deepen my faith. I recognized that Barry shared the Ba’al Shem Tov’s vision of human possibility. Although I never fully acquiesced to his incredible optimism, I did eventually come to focus more on human potential than on human weakness.

My friendship with Barry during those years also proved to be an incentive for turning in earnest to the study of the Ba’al Shem’s life and teachings, and finding ways to incorporate those teachings into my life. As I engaged with the Besht’s teachings I did so with an image of Barry Barkan in my mind, and this made the texts come alive in my imagination.

Describing what it was that brought him to Jewish spirituality, Barry wrote:

My life in Jewish Renewal began even before I imagined the existence of such a movement. While on an identity quest in New York’s Central Park in the late sixties, I met new friends who connected me with the living power of the ancient tradition. I read one line by Reb Martin Buber, “For me Hasidism was the restoration of the connection. . .,” and I intuited that for me, too, the spiritual lineage of the Baal Shem Tov provided the connective tissue to a spirituality that I had not yet experienced. But where to find its living expression? It wasn’t there for me in the Hasidic enclaves I visited in New York and Boston. [Endnote: Barry Barkan, “You Are Building It and They Are Coming,” in Victor Gross, Reuven Goldfarb, Yehudit Goldfarb, Nadya Gross, and Miriam Stampfer, Ancient Roots, Radical Practices, and Contemporary Visions, The Aquarian Minyan, p. 75]

Drawn by the personal example and the teachings of Shlomo Carlebach and later by Zalman Schachter, Barry joined with Judith Wallach and Minucha Gleich to found the Aquarian Minyan. Barry called this new form of Judaism “Native American Hasidism.”

Many of the people in the [Aquarian] Minyan and its many sister communities that have sprung up around the world do see ourselves as a uniquely American incarnation of an ancient Jewish shamanic tribal tradition which previously had its last major flowering in Eastern Europe in the late eighteenth century.

Through his contact with Reb Zalman, Barry had developed a notion of what he called “the rebbe within,” an idea that was somewhat at odds with Reb Zalman’s understanding of what it meant to be a rebbe.

Shaped and formed by the egalitarian notions of the sixties, many in our movement have advanced the notion that the shamanic quality of the Rebbe figure resides not in one person or in a dynasty, but in the community and its members who take this form of service seriously . . . as we sing, dance and tell stories, as we bring the presence of the Holy One, blessed be the Name, into the realms of our personal, communal and work lives.

In 1977 Barry invited a group of friends to his home on a Sunday afternoon to share some ideas about his professional work that had been brewing in his mind.

He told us that he had been deeply concerned about the vast number of old people who were being warehoused in long-term care facilities such as nursing homes. “These folks are our elders,” he asserted, “and they deserve respect and honor. Just because they are old does not mean that they should have to give up their hopes for finding happiness and meaning in the last years of their lives. Every elder holds the wisdom of a lifetime, and this wisdom is so necessary for future generations . . . I believe that we need to create communities of hope and meaning, providing elders with a sense of their own worth as keepers of wisdom for society.”

We were all excited by Barry’s ideas and supported his vision. Together with his wife, Deborah Cushman Barkan, Barry went on to create a new model for elder care, which they called Live Oak Regenerative Community. Barry’s and Debby’s work is having a profound effect on the culture of aging, most especially in Israel.

I had been living with a lot of self-doubt, out of touch with my essence. Barry’s modeling of the notion of the rebbe within made the Aquarian Minyan a place where I could begin to transform that negative pattern and learn to grow wings. It was only a matter of time until I became a spiritual leader in the Minyan. I also served as interim rabbi to a local Reform congregation for nine months while their rabbi was on sabbatical leave.

In those years, I was working as an attendant for disabled people. I was also conducting weddings for couples and Bar/Bat Mitzvah mentoring and ceremonies for families unaffiliated with synagogues. I called my project “Kehilla: the Synagogue Without Walls.” Inspired by Barry’s example, I began to wonder whether there might be something particular that I, as a rabbi, might contribute to the Jewish world. When I prayed for discernment, the still small voice within me whispered that the time was coming when I would once again serve as a rabbi in the larger Jewish community, but in a way entirely different from the past.

In large part Barry’s trust in my capacities gave me the confidence to start Kehilla Community Synagogue. Barry possessed a profound ability to envision an optimistic future. Through my contact with him I discovered that I, too, had that ability. I launched Kehilla Community-Synagogue with a vision/mission paper titled, “Re-visioning the American Synagogue.” The motto for the new congregation came from the book of Proverbs, “Without vision the people perish.” (29:18)