Posted by Dee Ward on Dec 26, 2016 in Economic Justice Committee Blog | One Comment 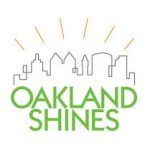 While being caught up in our shock and fear from national election results, many of us may have missed our Oakland pot of gold.

The Economic Justice Committee, in coordination with Oakland Community Organizations (OCO) colleagues from Imani Community Church and Primera Iglesia Presbiteriana Hispana, canvassed and leafleted in support of five local measures that all won by substantial margins.

Measure A1:  This measure is a $580M property tax bond to provide 8500 units of affordable housing for low-income residents in Alameda County. In addition, monies will be made available to assist homeowners to stay in their homes as they age or become disabled. This measure will take effect for tax year 2017-2018 and support housing projects for over two decades.

Measure G1: This measure is comprised of an annual parcel tax of $120 on homeowners and commercial property owners that would increase Oakland teachers’ salaries and improve middle schools. A measure improving high schools in Oakland was passed two years ago. Oakland middle schools, with inadequate hygiene and school supplies, malfunctioning plumbing and poor heating systems, have needed repair for a long time. Now, students and teachers will have an opportunity to be in environments which enhance the capacity to learn.

Measure HH: This measure adds a one cent per liter excise tax on distributors of sweetened beverages.  A similar measure in Berkeley has been successful in reducing the consumption of these drinks that in substantive quantities have proven harmful to our health, increasing the risk for heart disease and diabetes. Contrary to soda industry ads, this measure has not been found to increase the prices on groceries in general.

Measure JJ:  This measure is the first major change in Oakland rent control law since 1980. Key components include placing the burden on the landlord to get permission for a rent increase above the cost-of-living adjustment (COLA) rather than on the tenant to contest an increase. Most tenants do not even know they have the right to file a grievance and the increases mostly go through uncontested. Now, the landlord will have to justify the increase, a change that is expected to reduce the number of increases substantially  Additionally, eviction protections are now extended to homes built before 1996, expanded from homes built before 1980. This measure takes effect February 1, 2017.

Measure LL: This measure approves the establishment of a police commission comprised of civilian commissioners which will advise and recommend policies and procedures to the Police Department; will require the Mayor to choose a Chief of Police from a list of approved candidates; and can fire a Chief of Police with cause. In addition, a Community Review Agency will be established to investigate charges of police misconduct and recommend discipline. Previously, the Police Department was responsible for overseeing their own actions and creating policy without civilian input. Given the current climate with increased revelations of severe police misconduct nationally, this change goes hand-in-hand with larger attempts for police accountability and a hopeful decrease in incidents of misconduct.

Oakland is also the beneficiary of other measures that will improve the lives of residents including AC Transit and BART improvement bonds.

OCO, the EJC, and local churches also supported statewide propositions in five areas and helped secure favorable outcomes in four of the five (Propositions 55, 56, 57, and 67).  The disturbing exception was the failure to overturn the death penalty.  An effort to repeal the death penalty in California (Proposition 62) failed narrowly, attracting 48.9 percent of the vote.  Worse, with 51.1 percent of the vote, a competing measure designed to speed-up implementation of the death penalty passed.  It remains to be seen whether objections to the proposition can persuade the courts to limit its implementation.

To view a detailed chart of results locally and statewide compiled by EJC member Richard Speiglman, see below. 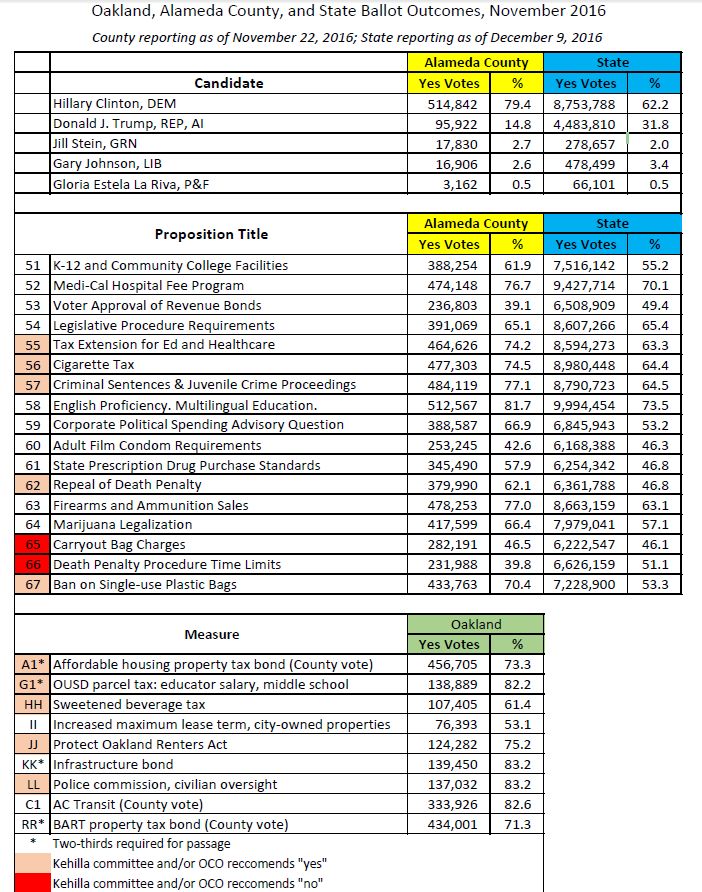