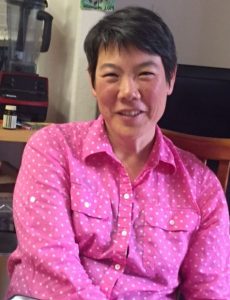 Greeting cards might seem to be the last place to create new consciousness. Hallmark, after all, largely dominates the field, and typically speaks to a suburban, white-picket-fence mindset tied to traditional values, while leaving so many people, perhaps most people, feeling varying degrees of alienation. But for Kehilla member and activist Eveline Shen, the simple greeting card serves as a vehicle for achieving social and economic justice, acceptance and connection.

As executive director of Forward Together, a national organization that has grown from a staff of 3 to 22 during the past 18 years under her tutelage, Eveli*ne dedicates her extraordinarily busy life to changing hearts and minds. Political campaigns are part of the picture. So is art.

Forward Together has a long history of partnering with artists, including Micah Bizant, creator of the iconic “Refugees are Welcome Here” poster. This year, they worked with Favianna Rodriguez, executive director of Culture Strike, to send out an array of “mamas day” cards to 5,000 women in immigrant detention centers with a note of support, adding that “love and family extend beyond walls and borders.”

“When I went to the drugstore, I couldn’t find a card that looked like my mom. My kids go to the store, and don’t see a card that looks like their two moms,” says Eveline, whose parents fled to the United States from Mainland China. 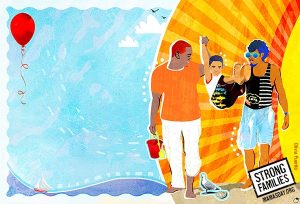 Forward Together’s parallel “papas day” cards inspired one undocumented immigrant dad, who particularly liked the card showing two men holding hands with their toddler, skipping along the beach with the sun out. “That’s my family – – the one I want to build” wrote the man, who noted he had never before seen such a card. In the drug store, “I’m usually one of the people that stand in front of those cards for hours and leave without anything because I don’t see myself, my family or my community in any of them. I really believe in the work you are doing with art and culture. It’s time to change the ways we see ourselves in the media and in the images around us.”

Forward Together works “on issues at the intersection of race, gender and sexuality,” Eveline says. “We work across many sectors, including economic justice, LBGT rights, racial justice, criminal justice and ending gender-based violence.”

A key purpose to Forward Together’s “culture shift campaign” is to humanize people who face stigma and are ostracized because of their race, immigration status, gender or sexuality, and, in the process, help bring about tangible change across society. When people are dehumanized, she says, “it’s so easy to turn away and ignore the plight of others, or worse, become complicit in upholding social norms or policies that attack and harm entire communities. We want to create a world in which each of our communities has the resources, recognition and self determination to live with dignity and respect. For that to happen, people need to start seeing each other and connecting heart to heart.”

One of Forward Together’s campaigns, with multi-faceted dimensions, is its Strong Families Initiative, coordinating with 180 organizations across the nation and dedicated to “changing conditions so that all families can thrive.”

“We want to build power in this country with women of color so that we can have a democracy that is responsive to our communities,” Eveline says. Part of the work involves rural communities, including Gallup, New Mexico, located in McKinley County, one of just three counties in the nation where the predominate language is neither English nor Spanish. In Gallup, Forward Together works with Elizabeth who lives in a house with her children and her mother, miles away from the nearest (Catholic) hospital and more miles away from any facility that provides reproductive health care. Forward Together brought Elizabeth to the state capital where, for the first time, she was able to talk with representatives about the lack of transportation, the lack of jobs and the need for reproductive health care. Since then Elizabeth has emerged as one of the leaders in her community, working to change policies to improve life for people in her community.

Eveline’s own parents fled from war-torn China and wound up settling in Ft. Collins, a majority white, agricultural and college community where she often faced racism. The experience of being treated as an outsider now helps drive her commitment to social change and economic justice.

Eveline grew up in a family without religious affiliation. Her partner of 22 years, Jennifer Wachter, is Jewish. They decided to join Kehilla a few years before their first daughter was born. “It was very important for our kids to be proud of their identities. We looked for a synagogue that is welcoming of interfaith, and inter-racial couples and that has a social justice orientation.” Eveline and Jennifer found that combination at Kehilla.

Now their Jessica is 15 years old, and Rose will also become a Bat Mitzvah at Kehilla, a celebration scheduled for this November.  “Kehilla’s Bar/Bat Mitzvah program is amazing and I am grateful that my daughters could be a part of it,” Eveline states with appreciation. 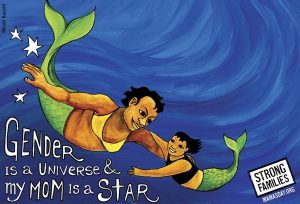 Meanwhile, Eveline continues to dedicate her life’s work to helping some of American’s most marginalized people, including GBTQ individuals, low-income women of color, trans and gender non-conforming people, and families who have experienced police violence.  Through creativity and innovation, Eveline finds ways to spur transformation of our culture and society to center those who are now in the margins.