ICE Raid In My Neighborhood 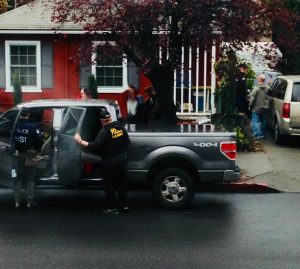 On Feb. 20th Kehilla hosted a rapid response training run by ACILEP (Alameda County Immigration Legal & Education Partnership) to prepare over 150 members of the interfaith community to support immigrant neighbors by confirming and documenting ICE raids in progress and by providing support and resources to those affected.  The training included opportunities to practice various roles that we might be called on to play at the scene of an ICE raid.

This morning, March 16th, I received a rapid response text, alerting me that there was a confirmed ICE action happening in my neighborhood in Berkeley.  When I arrived at the scene, I discovered that three people had already been taken away by HSI (Homeland Security Investigations), which often functions in conjunction with ICE. Three of the six unmarked vehicles were parked in a church lot. It was extremely upsetting that they had, apparently, partially staged the raid from the private property of a religious institution without permission. About 20 people were present as witnesses, including ACILEP staff, neighbors, and a number of rapid responders. Many were taking photos and talking with neighbors in an effort to identify who had been detained so that legal and other support could be provided.

Although the raid was heartbreaking and terrifying, particularly because it occurred in my neighborhood, I am so grateful that community came out in outrage and support.  I saw several Kehilla members, a number of people who had attended the training, including two clergy, and met a number of concerned neighbors ready to help and to learn more about how to respond in the future.

I learned firsthand the importance of keeping ACILEP materials in my car and how difficult it is to remain calm and centered when responding to a raid. (My adrenalin was surging.)  I hope to be better prepared the next time I receive a rapid response text…..