Good News from the Immigration Committee

Posted by Maya Joshua on May 29, 2019 in Immigration Committee, Kol Kehilla Newsletter | No Comments

by Catherine Lyons and Julie Litwin

It seems hard to imagine – considering the news we read and hear about the immigration situation – that there can be good news.  Those who have had the privilege of housing or accompanying a refugee or an immigrant have had the opportunity to experience some moments of success and joy with those individuals.  Recently we have had a series of wins, which we are happy to share with our community.

Orlando, a 20-year-old from Guatemala who was detained for almost a year, was released on bond to a Kehilla sponsor and accompaniment team on Friday May 10th.  The judge hearing his case is known for only releasing a detained person to family members. (Orlando has no family in this country). At an initial hearing the judge said she didn’t know what an accompaniment team was.  When evidence was presented to the judge that described the close relationship that Orlando and his sponsor had already formed via phone and mail and the support available through Kehilla’s accompaniment teams, she was convinced and granted bond.  The parents of one of the accompaniment team members posted the bond on the spot.  Orlando is now free while he continues to fight his case! 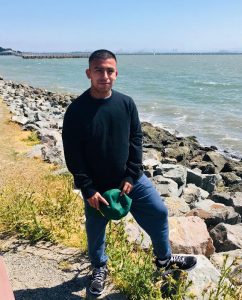 Noheli left Venezuela a few years ago to escape an abusive situation and applied for asylum at the border.  ICE held her for over 3 months at the West County Detention Center, where her health began to deteriorate. She was finally able to get legal help and was released on bond in June 2018 to Kehilla sponsors, Yael Falicov and Sam Davis. Noheli’s accompaniment team took her to dozens of medical appointments. Although it took many months for her to recover her health, she is now well, is living with another host family and has a job. Noheli’s team, housing hosts and supporters from Freedom for Immigrants attended her asylum hearing on May 7th. Noheli cried tears of joy after  hearing the judge’s decision to grant asylum. 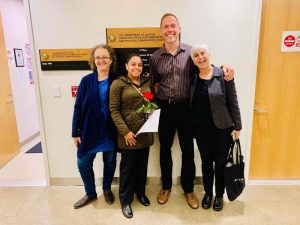 Noheli with team members after being granted asylum!

Lili Shidlovski and her partner Dennis provided housing for 20 months to a newly arrived family from Guatemala—Juan, Maria and their son, who Lili described as a scrawny, undernourished 9-year-old. He is now passionate about basketball and is almost as tall as his father, and he has a new baby sister! The family has been assisted by a devoted Kehilla accompaniment team. Very recently, 3 more family members fled Guatemala and were apprehended at the border in Texas. Lili and Dennis sponsored and bonded out Jonatan and Fernando, who are now with their family in Alameda, and Nehemias will arrive this week. 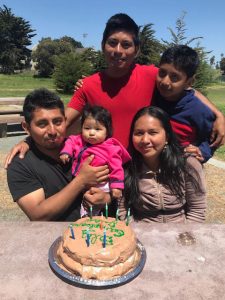 Hay—Granted Pardon, No Longer at Risk for Deportation

On March 13th, ICE arrested Hay and planned to deport him to Cambodia, a country he doesn’t know.  Hay was a small child when his family fled the genocide perpetrated by the Khmer Rouge. After living in refugee camps, he and his family were resettled as legal refugees in the US.  Hay had few resources to help him deal with the trauma he had experienced and the difficulty of adjusting to life here.  Like many others in these circumstances, he ended up joining a gang as a teenager and running afoul of the law. He served his time and turned his life around.  He is now the breadwinner for his wife and severely autistic son and a caretaker for his elderly parents. The current administration is currently targeting nearly 2000 Cambodians in circumstances similar to Hay’s.

On April 25th an immigration judge reversed Hay’s removal proceedings and restored his green card status. He was pardoned by Governor Newsom and is no longer at risk to be deported to Cambodia. This victory was achieved thanks to a strong community effort (including the Kehilla community) that brought Hay’s situation to the attention of the media and Governor Newsom. 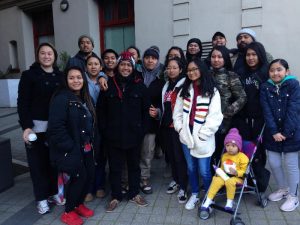 Hay with his extended family

Aida is a 29-year-old woman from El Salvador who suffered horrific abuse at the hands of her father and ex-partner before fleeing in 2012.  Once here, she requested asylum and began to rebuild her life. In November 2018, just 2 months after giving birth to a premature baby, she was arrested by ICE based on an unreliable Interpol Red Notice and has been detained since that time, cruelly separated her from her partner, her 4-year-old and her new baby. With tremendous, unrelenting support from the faith community in the Bay Area (including many Kehilla members), California Immigrant Youth Justice Alliance and Pangea Legal services, she was granted asylum on May 20th.  The government may still choose to appeal the decision, and Aida continues to be detained and separated from her family. However, this is a huge step forward towards her freedom. 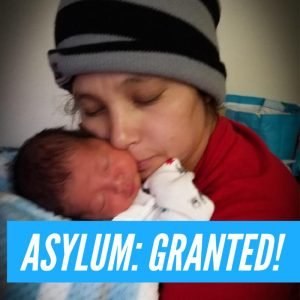 Aida with her baby

Karla—Graduated from High School and Heading to College!

Karla came to Oakland 3 ½ years ago from Honduras with her mother and 3 sisters. The family had undergone many hardships, and none of them spoke any English.  The family was matched with a Kehilla accompaniment team 2 weeks after they arrived and have worked together since then.  On May 22nd Karla graduated with honors and was awarded a scholarship by Oakland International High School.  She will attend SF State in the fall. 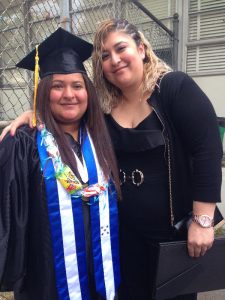 Karla and her mom

Julie Litwin Gets an Award!

Representative Barbara Lee honored Julie, awarding her the Mildred Parish Massey Legacy Award.  This award is in honor of Representative Lee’s mother, a woman she describes as her role model.

Julie is a role model for many in Kehilla.  Her commitment, drive, compassion, and organizational skills have moved Kehilla’s strong and robust Immigration Committee to be what it is today.

To learn about ongoing opportunities to engage in immigration support work contact: ImmigrationCommitteeChairs@kehillasynagogue.org 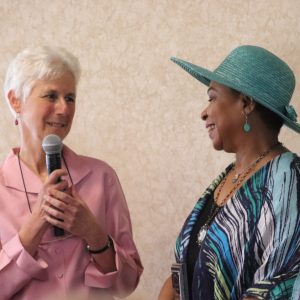