Posted by Dee Ward on Feb 8, 2016 in Economic Justice Committee Blog | No Comments 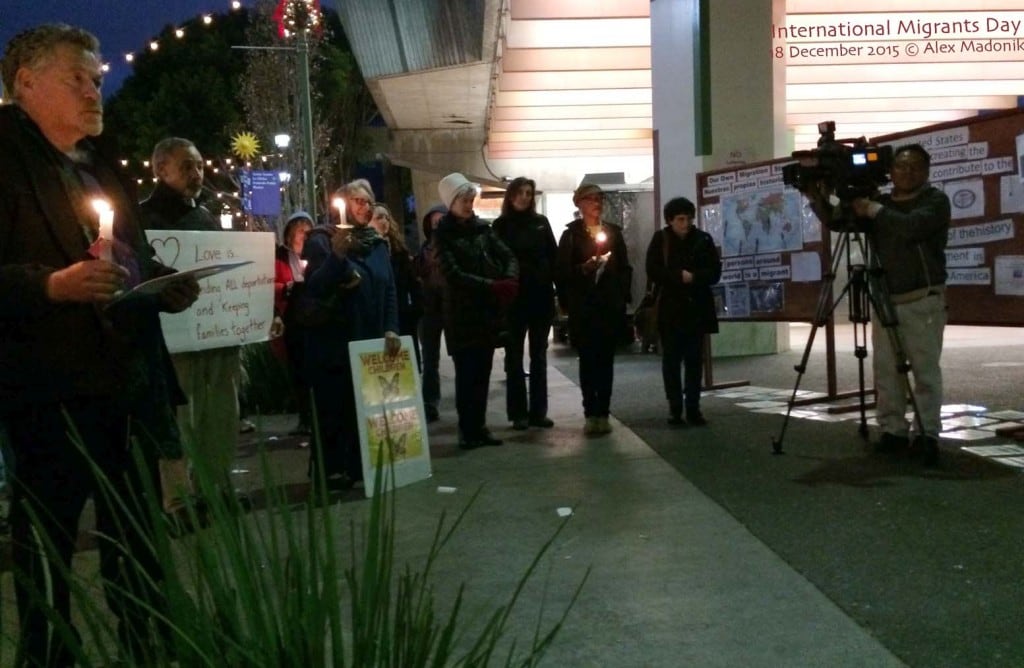 The year 2015 may be remembered as “The Year of the Refugee.”  So many have fled the civil war in Syria, and millions more are on the move in every corner of the world where violence threatens.  We are haunted by images of families and children, clinging to derelict boats or drowned in the surf.  Nor can they be sure of a welcome when they arrive in Europe or in North American.  The political right wing has vilified leaders such as Angela Merkel, named “Person of the Year” by Time Magazine for opening Germany to refugees.  Anti-immigrant rhetoric dominates the current presidential campaign in the U.S., at least on the Republican side.

Kehilla is standing up for the rights of migrants.  We joined with our partners in the East Bay Interfaith Immigration Coalition (EBIIC) to honor International Migrants Day on December 18th, and members of the EJC helped other local groups to welcome refugees and condemn negative profiling of Muslims (see below for Karen Rachels’ report).

In August of 2015, 16 faith leaders traveled to Guatemala and Honduras to document the “root causes” of migration.  They heard first-hand about the threat of gang violence, and the poverty that follows from the displacement of people by large-scale hydroelectric projects, palm oil plantations, mining operations, and the construction of new tourist resorts.  No wonder tens of thousands of refugees arrived at our borders over the past couple of years.  It’s a long and hazardous journey, and hundreds have died or disappeared along the way.

In Honduras, our EBIIC partners encountered The Committee of Families of Disappeared Migrants of Progreso (Comite de Familiares de Migrantes Desaparecidos del Progreso – CoFamiPro). These women share a common pain in the disappearance of their children, and this pain propelled them to go looking. They gathered photos of their own children as well as the children of other families, enlarged the photos, and then followed the route of their children’s migration. Along the way, they stopped in city plazas and invited local residents to come, to look, and to help them identify any of the lost children. They asked us to help get their story out, and that is what we did at the Fruitvale BART Station on December 18th.

Our displays included the photos of the missing children, as well as information about International Migrants Day, root causes of migration and the role of the U.S., and actions that we can take locally to assist refugees.  As the evening grew darker, we lit candles and listened as our leaders (including Avi Rose, Kehilla member and Executive Director of Jewish Family and Community Services of the East Bay) spoke about the plight of migrants.  To further dramatize the uncertain journeys they face, our EBIIC partners then presented a street theatre story of a Guatemalan woman who waits for news after her son travels north, eventually following him to Mexico, where they are reunited.  It was a memorable evening of art, music, and personal testimonies.  And, the message remains urgent, as ICE has since announced a new round of raids, aimed at deporting any immigrant families who have failed to obtain asylum or other legal status in the U.S.  Without expert legal assistance, recent refugees from Central America have virtually no chance of proving the dangers they face in their home countries, and that is why Hillary Clinton has just called for a suspension of these raids.  Stay tuned for further calls to action.

On January 2, 2016, EJC members Richard Speiglman and Karen Rachels participated in an immigration-related canvassing effort sponsored by Jewish Voice for Peace (JVP). After a brief training, they walked with JVP member Ellen Brotsky through neighborhoods in El Cerrito and Richmond asking residents to post the following in their windows: 1) a beautiful poster, “Refugees are Welcome Here,” with a picture of a Middle Eastern man holding his child; and 2) a flyer stating “Stop Profiling Muslims!”

We found all residents we spoke with agreed strongly with the sentiments and most were willing to post in their windows. Many had not heard about the recent incident at Richmond’s Islamic Society of West Contra Costa County: A man shouted outside the mosque, “I am going to kill you,” and was arrested later in the month after a partially-built pipe bomb was found in his home.

One moving moment for us was a conversation we had with a Muslim mother and her adult daughter. Due to the cold, the mother was holding a sweater on her head fashioned similarly to a hijab. She told us she usually does wear a hijab and had been harassed for wearing it. As she was telling us, she was crying softly. She kept saying, “We are all human, we are all human.”

The EJC is considering joining forces with JVP to organize a similar canvassing in Oakland and will inform Kehilla members of the details soon.