All Kehilla members are invited to join us for our customary meetings on the second Monday of the month at 7pm.   Below are summaries of the books we will read in November and December taken from Amazon. 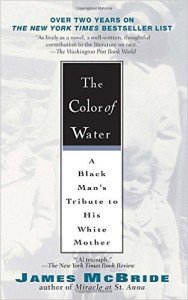 Monday November 9, 7pm: The Color of Water by James McBride.

Who is Ruth McBride Jordan? A self-declared “light-skinned” woman evasive about her ethnicity, yet steadfast in her love for her twelve black children. James McBride, journalist, musician, and son, explores his mother’s past, as well as his own upbringing and heritage, in a poignant and powerful debut, The Color Of Water: A Black Man’s Tribute to His White Mother.  In The Color of Water, McBride retraces his mother’s footsteps and, through her searing and spirited voice, recreates her remarkable story. The daughter of a failed itinerant Orthodox rabbi, she was born Rachel Shilsky (actually Ruchel Dwara Zylska) in Poland on April 1, 1921. Fleeing pogroms, her family emigrated to America and ultimately settled in Suffolk, Virginia, a small town where anti-Semitism and racial tensions ran high. With candor and immediacy, Ruth describes her parents’ loveless marriage; her fragile, handicapped mother; her cruel, sexually-abusive father; and the rest of the family and life she abandoned. 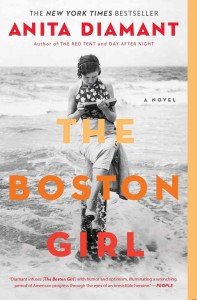 Anita Diamant’s Boston Girl follows the life of one woman, Addie Baum, through a period of dramatic change. Addie is the spirited daughter of an immigrant Jewish family, born in 1900 to parents who were unprepared for America and its effect on their three daughters. Growing up in the North End of Boston, then a teeming multicultural neighborhood, Addie’s intelligence and curiosity take her to a world her parents can’t imagine—a world of short skirts, movies, celebrity culture, and new opportunities for women. Addie wants to finish high school and dreams of going to college. She wants a career and to find true love. From the one-room tenement apartment she shared with her parents and two sisters, to the library group for girls she joins at a neighborhood settlement house, to her first, disastrous love affair, to finding the love of her life, eighty-five-year-old Addie recounts her adventures with humor and compassion for the naïve girl she once was.

Also at the December meeting we will select the titles we want to read for next year.  If you’ve been thinking of joining the group and want to suggest a title,  this is the meeting to come to.  The process we have used to choose books starts with everyone being able to nominate any book(s) they would like to read.  It can be fiction or nonfiction.  It should have some sort of connection to Judaism.  We have read a number of books relating to the holocaust over the years and there are several members who feel that they don’t want to read any more on the topic.  Many members also prefer to select books that are available from the library systems so they don’t have to purchase them.  Feel free to suggest any titles you want and include a one-paragraph synopsis if you can.  Please send suggestions to jsklar3826@yahoo.com.