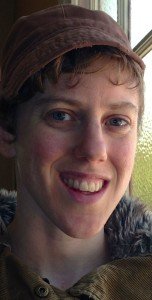 Managing what Kehilla has faced in recent years – the stress of the financial crisis, civic strife from the Bay Area to the Middle East, and three changes of executive directors – has demanded the skills of an acrobat. It’s a good thing we had one.

SAM Luckey finished her last performance with the Topsy Turvy Queer Circus in June, right after stepping down from the Kehilla Board of Trustees. A week later, she traveled to Boston, Massachusetts where she has enrolled as a rabbinical student at Hebrew College.

As the news traveled throughout the Kehilla community, members were torn between mourning the loss of SAM’s leadership at Kehilla and celebrating her new role in the wider world of Judaism.

“I’m sorry to lose her to rabbinic school but I have every confidence we’ll be hearing from her frequently — and that we’ll see great things from her in the years ahead,” says Jay Koch, who has served with SAM on the Board of Trustees.

In many ways, SAM represents the promise of Kehilla’s future. She first came to the synagogue’s High Holy Day services as the child of members Paul Kivel and Micki Luckey, and joined the school in fifth grade to prepare for her bat mitzvah.

After completing that program, she acquired leadership training at Jewish Youth for Community Action and continued her Jewish studies at Berkeley Midrasha.

But after high school, she chose to pursue her passion for circus arts. She spent two years in a professional circus school, Circus Space, in London. Then she worked in a variety of circuses, including a stint traveling with the Ringling Brothers.

An injured shoulder brought her back to her parents’ home seven years ago. While recuperating there, she reconnected to Kehilla, which had meanwhile moved very nearby. “Exciting stuff is going on here,” she remembers thinking after she came to check it out.

Still in her twenties, she stood out in a synagogue dominated by Baby Boomers and their school-age children. But that never gave her pause. “I’m a chameleon,” she says. “I hang out with people from zero to 96.”

She looked for ways to become more involved. For a while, she helped connect callers to Jewish services through a database managed under contract by Kehilla. She also tried leading High Holy Days services for fourth and fifth graders. “That wasn’t really my forte,” she says.

What appealed to her more was the Welcoming Synagogues Project, a nationwide effort to make synagogues more welcoming to LGBTQIA congregants.

In her work there, she typified some of Kehilla’s core values, says Eva Pettersson/Bodrogi. ”She represents the open-mindedness, thinking out-of-the-boxness and the sweetest and bold queerness.”

The role also brought her to the attention of other members of the Board of Trustees who were looking for a younger member to diversify the group. She quickly proved she was no token.

“The youngest member of the Board became its co-chair and helped lead the synagogue through the challenges we faced, and did so with a quiet and steady presence that inspired confidence,” says Rabbi David Cooper.

Fellow board member Lynn Bravewomon celebrates SAM’s “ability to listen and summarize and focus on capturing all voices in a group, bringing positive attitude and a lightness to thinking out loud.”

But perhaps SAM’s greatest initiative has been Glitter Kehilla, a new organization she founded with Talya Husbands-Hankin to diversify the synagogue as a whole.

A community for people in their 20s and 30s, Glitter Kehilla welcomes all genders and sexualities. A series of Shabbat services and other gatherings has quickly burgeoned to a Facebook and email list of over 250 people, several of whom have already joined Kehilla as full members.

While she has worked to build the community, SAM says, Kehilla has continued to nurture her spiritual growth. “In addition to coming to services, I’ve really taken advantage of the adult education,” she says. “I’ve taken at least ten courses.”

One of the first classes made a particular impression. Coming from an interfaith family, she had a passion for comparative religions. But she was struck by Abraham Joshua Heschel’s advice to spiritual seekers to go deeper into one tradition. “I want to study religion,” she thought to herself. “What I should do is study Judaism, to have that foundation for my personal practice, and from there to do interreligious community building and study.”

During a 2011 retreat with the Aleph Alliance for Jewish Renewal in Redlands, California, she made the decision to become a rabbi.

She will spend six years at Hebrew College, a nondenominational seminary, beginning with intensive Hebrew study this summer.

She assures us we haven’t lost her. “I want to stay connected to the community and bring back what I’ve learned,” she says.

After ordination she hopes to work at a congregation, ideally in the Bay Area. She also plans to continue doing circus work.

Wherever she ends up, one thing is certain. They’ll be damn lucky to get SAM Luckey.