Madeline was initially reluctant to work to become a Bat Mitzvah. Our family has not been very observant and Jewish customs, rituals, and values were pretty new to her. We felt strongly that she should go through the process, with the clear understanding that it is her choice to discontinue if she could articulate reasons why she wanted to stop. She began and throughout the entire process, she diligently, albeit at times mechanically, completed the tasks she was assigned.  We saw signs that she was gaining a lot from the process– it opened her mind, gave her the chance to challenge herself in many ways, and connected her to our family’s values and history. 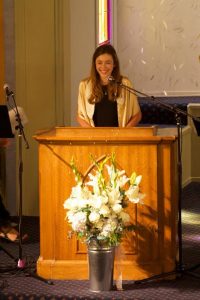 She worked incredibly hard on her drash and covenant, and the results were very personal and profound writings that reflected her deep thinking and accomplishments.  Her drash, which focused on whether Noah was truly righteous, drew from her knowledge of the Holocaust and the impact it had on her family as well as what she had learned in school about being an ally, not a bystander. Her covenant described very frankly the process of overcoming her fears and resistance to becoming a Bat Mitzvah, which she analogized to overcoming her fear of rollercoasters.  For a very reticent 13 year old, her insights and candidness were impressive to me and those who attended the service.

Now, one year later, I see in so many ways that the Bat Mitzvah process continues to impact and influence her development and her values. She willingly identifies fears and seeks to confront them– seeking out help in school, navigating the social and political dynamics of gigantic Berkeley High School, joining the YMCA Youth and Government model court and legislature program.  She participated in a school walkout to protest a racist incident, echoing her learning about being an ally, not a bystander. She has become more reflective, more independent, more thoughtful, and more compassionate.  She is more self-assured, and more willing to take on challenges that previously she would have resisted.  Most significantly (for me), I vividly recall the transformation that took place on the bima–her smile, her gaze at the people on and off the bima who helped her get to that day–she finally understood that being part of Kehilla means that she is part of a community on which she can depend, that shares our values, and from which she can learn a tremendous amount.

Testimonial #2: Reflections of a 2016 Class Parent

I love how the Kehilla Bar/Bat mitzvah  program gives students the opportunity to decide upon and deep their relationship to Judaism and explore how they want to practice it. The drash and covenant writing are the only two pieces of writing either of my children has ever done that they truly 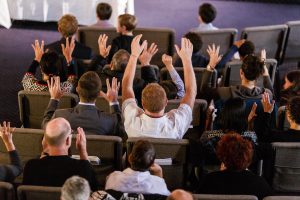 cared about and were willing to edit, revise, and restructure over and over until it was something they could be proud of. Getting up in front of friends and family to offer their teaching and covenant and to be witnessed and blessed for who they are provided a unique opportunity to feel a sense of pride and accomplishment, to learn what they were capable of, and to be seen, supported, celebrated and accepted publicly in a. loving community. It was profoundly powerful and meaningful.