From 1972 to 1978, Lea Delson spent junior high school and high school years growing up in Omer, a Jewish village near Beersheba. Lea’s parents, originally from Chicago, immigrated to Israel in 1972. Her parents were committed Zionists and their family joined a small Reform congregation which was lay led and had many Americans members. Despite their liberal outlook, contact with Muslims was minimal. “Even though there were Arabs and Palestinians around, I rarely interacted with them,” Lea recalls.

That didn’t change much after she moved to the East Bay in 1985 to study biology at UC Berkeley. She plugged into the Aquarian Minyan and then Kehilla, and felt deep connections with Jews. But her contact with Muslims long remained minimal. In 2010, Lea was feeling distressed about the continuing conflicts between Israelis and Palestinians, and decided on working to bridge the gap between peoples of faith. One problem, though, was that locally there were more Jews expressing interest in dialogue that Muslims. Then, Lea noticed an item in Kol Kehilla about an interfaith effort in Richmond to make meals for people in need.

On doing that, Lea chatted with Reza Rohani, the director of Oakland’s Islamic Cultural Center. Rohani noted that his center had an art gallery, and Lea wondered whether an interfaith art show might be a good idea. Rohani noted that Kehilla, along with the Montclair Presbyterian Church and the Islamic Cultural Center formed the Faith Trio and had been hosting gatherings focused on meals, spurring talks and friendships. Their discussion that day was a seed of the Interfaith Art Exhibit Committee, which over the years has sponsored four major art shows at the Islamic Cultural Center of Northern California, featuring hundreds of artists who submit written personal statements along with their art.

The exhibits have each stayed up for at least a month and opening days alone have attracted hundreds of visitors. Themes of the biennial shows reflect their spirit: “Collaboration and Connection” (Dec. 3, 2017-Feb. 24, 2018); “We are the Bridge (2015); “Finding Common Ground through Sacred Words” (2013); and “Diverse Visions of Harmony” (2011). For details and pictures go to www.interfaithart.org, a website that Lea and Arash Shirinbab at ICCNC worked together on. Lea notes that Nabeela Sajjad brought in many of the Muslim artists. Forthe closing ceremonies, “We asked each artist to talk about their work,” Lea recalls. “Those were beautiful. Each statement had layers and depth.”

A quick Google search confirms that a great many efforts at Muslim-Jewish- Christian dialogue are taking place in the United States, Israel and Europe. Interfaith art exhibitions are relatively, perhaps wholly, unique though, as Lea happily discovered, they engage artists and others in dialogue and cooperative efforts, spurring interfaith community as well as creativity.

When not curating art and talking with artists of all faiths, Lea can often be seen taking at Kehilla b’nai mitzvahs and other occasions, taking pictures. She can be reached by email at lea@delsonphoto.com. 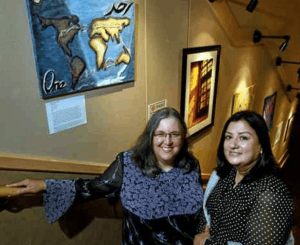 Artists and interfaith committee members Lea Delson and Ruby Kazi at the “We are the Bridge” exhibition that traveled from Oakland’s Islamic Cultural Center to the Osher Jewish Community Center in San Rafael in 2016. Published with permission from Robert Tong, photographer-photo editor, and the Marin Independent Journal.