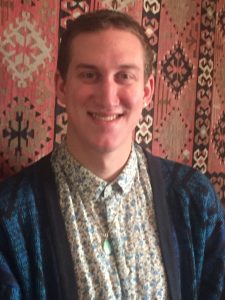 After graduating from college at UCLA with a degree in creative writing and English literature, Jacob Klein moved to the Bay Area in August 2014, hooking onto an internship in Berkeley at Tikkun magazine. They went on to a part-time gig at Laurel Bookstore and a position in San Francisco office of Keshet , a national nonprofit that works for full inclusion of lesbian, gay, bisexual, transgender, and queer Jews in Jewish life. It also serves those who consider themselves queerish and Jewish and seeks to build alliances with friends who do not identify themselves as LGBTQ.

They started at Keshet, not expecting the position to last. They stayed three years, and wound up as the organization’s Regional Manager. Among others, Jacob worked with Kehilla members Maya Brodkey and Talya Husbands-Hankin, also known as Lady Synagogue, who recruited Jacob into Glitter Kehilla and introduced them to a simple Shabbat service during the Trans March at Dolores Park in San Francisco in 2015.

“I was not raised religiously,” Jacob says. Their family kept Shabbat when they were a very young child. But that went away.

“I did not have a B’nai  Mitzvah. I don’t have a lot of knowledge about Jewish practice.” That’s changing. Glitter drew Jacob in, both to Judaism and to Kehilla.

At Glitter services “the Jewish ritual is accessible — there’s often explanation of why we’re doing a certain prayer, and why at this time,” Jacob explains. In addition to a focus upon queerness, “we grapple with racial accessibility as well. That’s the challenge of progressive Judaism right now.”

Along with Glitter, Jacob says, there are now more political avenues, such as with the “If Not Now” movement focused nationally on ending American Jewish institutional support for Israel’s occupation. While the lean of that movement differs from that of Glitter, there is overlap. “They bring in spirituality to their political action. We bring political action into our spirituality,” they say.

Glitter itself “provides a space for young adult Jews, mostly queer, to come together around meaningful ritual that has a social justice bent.”

Jacob first become involved in Glitter when it partnered with Keshet on the Friday of LGBTQ Pride 2015 at the Trans March in San Francisco’s Dolores Park. Jacob soon found themself experiencing Judaism, celebrating holidays and getting involved in progressive politics. They became a Jeremiah Fellow at Bend the Arc, and soon moved onto attending services at Kehilla. They participated in the first Kehilla leadership retreat in 2016, and made friendships with several older members of Kehilla, many of whom are queer. “I have a couple of very close Kehilla friends who are decades older than me,” Jacob says. “That’s the beauty of Kehilla.”

Meanwhile, Jacob and four other leaders at Glitter — Talya, Maya, Frances Kreimer and Dylan Cox — organize four flagship events during the year along with intergenerational LGBTQ gatherings, commonly attracting about 40 people to each. The last Trans Day of Remembrance brought in about 50, while the “fun, lively and sweet” seders are even more well attended with about 120 attending last spring.

“There’s no young adult program at Kehilla. Glitter is essentially it,” Jacob says. “We have a mostly queer focus. Some straight people come, mostly they are welcome… We only turn people away if they are going to cause some kind of harm to the community, like if people wear strong scents  or we’re creating specifically queer places.”

Meanwhile, Jacob says, “I think spirituality can have radical possibility for the good of all.” Religion, they also say, is “an attempt to get people to live their life in a way that they consider moral, but like any institution, it can be easily plagued by closed-mindedness.”

Jacob adds that spirituality sustains the soul and religion “externalizes for me the spirituality I have within myself,” helping to bring about “a deeper, more thoughtful and potentially more engaged life.”