An Interview with Avi Brooks 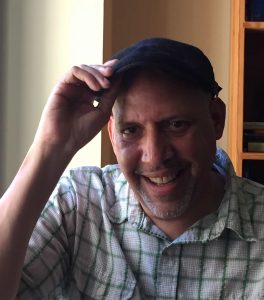 Kehilla member Avi Brooks finds connection to his Jewish and African American identities in the music of Passover seders and spirituals. “We say at seders, “Next year in Jerusalem, Brooks says, adding, “Black people in spirituals have said for hundreds of years, “We will see Zion.”

Avi, an avid science fiction fan and a professor at Cal State/Hayward, has grounding in different worlds and an ongoing involvement in Afrofuturism. He says Afrofuturism “combines science fiction and fantasy to re-examine how the future is currently imagined and to re-construct futures-thinking with a deeper insight into the black experience.” Avi adds the study helps “increase people’s awareness of their own public imaginations.”

Avi co-produces and creates a podcast on Afrofuturism (The Afrofuturist Podcast on iTunes with Ahmed Best). In His engaging, friendly manner Avi offers idea after idea that startle, amaze, and bemuse. He is is intrigued by new forms of storytelling built on “augmented reality” where holograms are added to views of the real world, enabling viewers to interact with both.
It’s a field that parallels, in a fashion, Avi’s personal experience. He grew up “partially sighted” in Los Angeles, and long relied on computers to help him connect to the world and his imagination. His world tied to those of his mother, a secular Ashkenazi Jew whose grandfather escaped from the Ukraine in 1902 to avoid being drafted for the Russo-Japanese War. His great grandmother left her Russian village for a day only to return to find that her whole village was destroyed in a pogrom.
His grandmother, who wrote down family history, lived in Brooklyn with her husband, until the U.S. Food and Drug Administration transferred him to California. His mother attended Fairfax High School.

Avi’s father was a black, Latino writer and creative thinker, who helped to produce a stage production of the play “Soul Alley” that examined the black experience in Vietnam. Avi recalls seeing the intense play produced on stage. HIs father also created a foundation for struggling black artists.

While Avi and his brother Jeff did not go to synagogue, he hung out at LA’s Westside Jewish Community Center, and, “We grew up with a strong Jewish identity.”

He recalls fondly doing skits on shabbat incorporating Beatles tunes. He also recalls identifying with the State of Israel, though, with its shift to the right, it seems to him more a Goliath than a David. In the wake of the war in Lebanon, Avi recalls feeling conflicted about Israel and what it means to be Jewish.

When his daughter was born in 2006, Avi and his partner Jocelyn, who was born in the Phillippines, decided to raise her Jewish. They named her Amieh (pronounced a-mi-eh), after his grandfather Arthur and “ami” or “my people” in Hebrew.
Amieh is scheduled to have her bat mitzvah on June 29, 2019, just over one year after Avi’s own bar mitzvah. Whatever develops, Avi will bring his own spirited creativity to the bimah. “My secret mission is to re-tell the Torah as science fiction,” he says, adding, “Superman, to me, is just another retelling of King David.”