A Milestone in Kehilla’s Religious Leadership 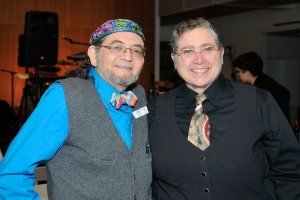 As Kehilla’s Executive Director, Board Co-Chairs, and members of the Transition Team, we are writing to share some important news about a significant change underway for our rabbinical leadership. In mid-October, Kehilla circulated an email titled “Transitions in Rabbinic Leadership” to the synagogue’s membership. (If you did not receive it, please check your spam folder.) If you have not yet read the email, we encourage you to click on the link below to learn about this transition, read a statement from Rabbi David, be re-introduced to Rabbi Dev, and learn how you can be engaged in building this next chapter in Kehilla’s history:  http://kehillasynagogue.org/transitions-2015/

Rabbi David has realized his dream of helping to grow Kehilla into a strong and vital community, and is ready to begin letting go of primary spiritual leadership, while still remaining actively engaged. Over the next two years, Rabbi David’s role will change as he steps into a new phase of his life and work with Kehilla. This transition process was initiated at Rabbi David’s request, and is being carefully shepherded by the Kehilla Board of Trustees and Executive Director, in collaboration with Rabbi David. Rabbi David will continue as Community (or ‘Senior’) Rabbi through June 2017, after which he will continue to be one of our rabbis, and an active member of our community, though his hours and responsibilities will be reduced.

When the Board promoted Rabbi Dev to Associate Rabbi two and a half years ago, it was with the intent that Rabbi Dev would grow into the senior role as Rabbi David became ready to reduce his role. As Rabbi David begins this transition, Rabbi Dev will step into new roles and rabbinic responsibilities, accordingly.

Rabbis David and Burt, the Board, and the entire spiritual leadership enthusiastically embrace Rabbi Dev as the right person to take up the mantle of Kehilla’s spiritual leadership. At its August 2015 retreat, the Board gave a unanimous vote of affirmation, agreeing to move ahead with a gradual increase in Rabbi Dev’s responsibilities during the current and subsequent fiscal years. Rabbi Dev will assume the senior rabbinical role beginning in July 2017.

Rabbi Dev will stay on as School Director through the remainder of the 2015-2016 school year, and possibly longer. In July 2016, Rabbi David and Rabbi Dev will both shift their roles to become “co-rabbis.” The details of that transitional year (2016-17) and the time frame for hiring a new School Director are still being worked out. After the transition is complete in 2017, Rabbi Dev will stay involved in Kehilla School and in the lives of our children and families, and Rabbi David will continue as a congregant and as one of Kehilla’s rabbis.

We want to use this time as an opportunity for us—as a community—to take stock of our riches, be strategic in the face of the upcoming change, and use this as a chance to strengthen our engagement with each other. Our goal is to create an ongoing environment that allows our spiritual leadership to best serve the community and its many different voices.

While we have already begun to receive many congregants’ expressions of support, excitement, and congratulations, the Board has created a Temporary Transition Team to convene community discussions from now until early December, during which people can ask questions and share thoughts with each other. We will host two open community meetings and a special meeting for Kehilla School parents and others interested in the specifics of this transition in regards to Kehilla School. These will help inform this transition and our communications with each other: 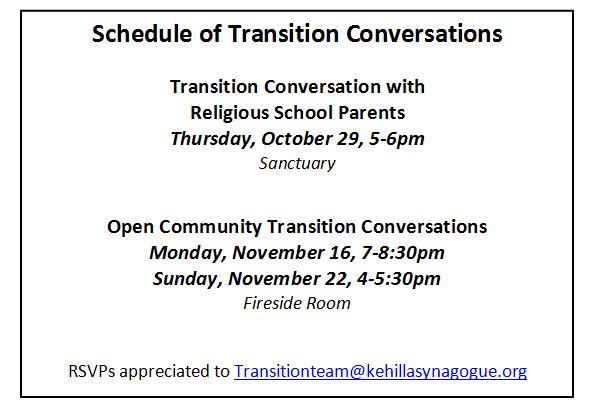 We would like to hear from you. We are happy to come to your chavurah, committee or any other grouping of congregants to discuss this transition, or we can talk to you one-on-one if you prefer. You can email us with any questions, concerns, words of appreciation or suggestions for celebrations.

We look forward to sharing this ongoing transition,

Barbara Petterson, Co-Chair, Board of Trustees and Transition Team Member

Nancy Feinstein,   Co-Chair, Board of Trustees