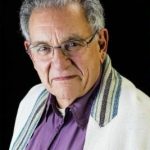 Note: This is the tenth of an ongoing series of personal essays on the beginnings of Kehilla. Each article shares the origins of one or more of the ideals and/or values that motivated me to start Kehilla. The essays are adapted from the manuscript of the book I am in the process of completing, tentatively titled There is Only One Love: The Ba’al Shem Tov in the Modern World.

How did it happen that LGBTQ acceptance became such an indelible principle in the founding of Kehilla Community Synagogue? It had to do with my personal experience as a bisexual.

I entered the conservative rabbinical school of the Jewish Theological Seminary of America in 1959. One of the things that made it hard for me to remain faithful to the God of Jewish tradition was my bisexuality. At the time I didn’t know the word “bi-sexual.” I thought I was a homosexual who was also attracted to women. The Jewish tradition I was trying to live by saw homosexuality as a mortal sin. My cravings brought me constant feelings of shame and guilt, and I was afraid that if my sin was discovered, I would be expelled from the Seminary.

When I revealed my love for my best friend he was horrified and told me that I was psychologically ill and that I needed to enter psychoanalysis. That was the worst night I had ever experienced. I was so despairing that I came quite close to slitting my wrists. But something stopped me. Was it fear of dying—or knowing somewhere deep inside that my love for my friend was real? But the next day I decided to take my friend’s advice and to seek out help.

I knew that I could not keep this secret from my family because I would need financial aid to pay for psychotherapy. I reluctantly called my mother and told her about my crisis. She was surprisingly understanding and compassionate; perhaps she had suspected all along. Mother flew to New York and together we visited three different psychiatrists, and I chose one of them to work with. I took the bus to Dr. Gruenthal’s office on Manhattan’s East Side three times weekly for three years, and with his help and non-judgmental tolerance and understanding, I learned to better accept who I was. During those years I maintained celibacy, but by the end of my course in psychoanalysis I felt open enough to form an erotic bond with a fellow student.

Fast forward to my senior year, 1965-66. I remember handing out leaflets for a big march against the war in Vietnam at lunchtime and dinnertime in the cafeteria of the Seminary. I tried to give a flyer to one of my Talmud professors. He looked at me and in his European accented English he asked, “Pro or con?” “I’m opposed to the war,” I answered. “Then you are a traitor!” he said sternly, “American boys are dying in Vietnam, and you are a traitor!” I felt terrible. I knew his story—how he had stood up to the Gestapo in Austria and yet escaped with his life. For a moment I hesitated. Could he be right? Yet my teacher, Abraham Joshua Heschel, who had also escaped from Europe, was actively opposed to the war. And so I marched.

Students at the Seminary were required to become chaplains upon ordination. The senior students were told that if we refused to enter the chaplaincy we would never be permitted to serve as rabbis of conservative synagogues. This was a tough moral dilemma for me, and so I sought Heschel’s advice. Despite his strong opposition to the war, he told me, “You should go. The soldiers will need your comforting.” Heschel opposed actions that broke rules; he was loathe to take part in acts of civil disobedience.

But how could I do this? I decided that if I were to be deployed to Vietnam I would go, but I would refuse to wear a military uniform. Soon enough I received a notification from the army base in Brooklyn with an appointment for my physical. I took a subway to the base, and underwent the entire procedure. The last interview was with an army psychiatrist. When he asked me if there was anything psychological that I thought might prevent me from serving as a chaplain in the military, I told him that I was a homosexual.

I waited for the results of the exam in a large waiting room. An hour later I went up to the front desk to find out how I had fared. The receptionist looked up at me with a straight face and asked, “Are you kidding?”

My file was lost and I was required to return to the army base and go through the exact same ordeal a second time!

And yet, I felt bad. Several of my fellow students who were married would be serving in Vietnam. Some of them had children. Had I erred? I was left with a feeling of guilt, but glad that I would not have to serve as a chaplain in a war that I opposed.

By the time I was planning Kehilla Community Synagogue in 1983, I knew that it would be openly welcoming to LGBT folks. I felt determined that homophobia would have no part in this new synagogue.